Alastor[2] (known within the mortal world as Alistair Caine) was the ex-husband of Julia Wagner and father of Hunter, Abigael and Parker Caine. He was an ancient, powerful demon who was the CEO of Alistair Caine Enterprises and Morningstar Biotech and a benefactor to the Department of Genetics at Hilltowne University. Alastor wanted to release the Source of All Evil so that Parker could be the host, making their family the most powerful in the Underworld. However, his plan ultimately failed, when Macy Vaughn took on the Source instead. Alastor bowed before Macy, who then mercilessly vanquished him.

Alastor was the patriarch of the Caine Family.

Alastor had been a powerful demon for at least three millennia. Sometime during his lifetime, he fathered three children with three different women: Hunter Caine, the full demon son; Abigael Jameson-Caine, a daughter with whom he fathered with a witch and cast out for being female; and Parker Caine, the half-demon son he had from his marriage with mortal scientist, Julia Wagner. Wishing to acquire the power of the Source to their family, Alastor planned to have Parker become the Source since the prophecy stated that the Source required a demon born of human to possess. In the 21st century, he started Alistair Caine Enterprises to blend in with the human world.

In "Exorcise Your Demons", after exorcising the Harbinger of Hell from Angela Wu and containing it within a paint can, Charity Callahan returned home with it. While on her way up to her floor, Alastor walked into the elevator and used his power of mesmerizing to make Charity switch paint cans, allowing him to walk away with the Harbinger with Chastity having no recollection.

In "Other Women", Morningstar Biotech became the sponsor of the Department of Genetics at Hilltowne University, allowing Alastor to collect the blood of Macy Vaughn. He sends his elder son, Hunter, to collect powerful witch DNA and eliminate all traces of his job (including the unwanted witnesses). Hunter later reported to him that he had failed his mission and explained how the Charmed Ones must have performed a spell to rewrite history, causing him to lose the witch DNA.

In "Out of Scythe", Alastor sends his younger son, Parker, to collect the shards of the Scythe of Tartarus (in hopes of finding someone to break the containment spell on the Harbinger), but Parker was thwarted by the interference of Jada Shields. Alastor is disappointed and regrets not sending Hunter to complete the mission. He informs Parker to use Maggie and her power to further their goals and warned his son not to fail him again.

In "Bug a Boo", Alastor is angry at Parker because he keeps failing all of the missions assigned to him. But in the end, his son managed to get the blood of both Mel and Maggie Vera, satisfying Alastor.

In "Jingle Hell", Alastor instructs his sons to steal a magical amulet with the ability to steal the Charmed Ones' powers. Later, he and Hunter share a sweet family moment with eggnogg in his office. From this conversation, it becomes clear that Alastor has plans to turn Parker into the Source.

In "Keep Calm and Harry On", within a week after the events of the spoiled Christmas, Alastor continues to question Parker on the whereabouts of Hunter, still not believing Parker's obvious lie. He continues to press his son on the subject even though Parker's health is deteriorating.
When Alastor learns from his ex-wife, Julia, that Hunter is in Tartarus, he shows shock and anger about it. He goes to Dante to try to free his son but ends up encountering the Charmed Ones.
After taunting and mocking the sisters, Alastor engaged them in a battle where he had them at an advantage but was defeated by a powerful spell created by Maggie Vera. He retreated and left the town, obviously fearing the Power of Three.

In "You're Dead to Me", shortly before he left Hilltowne, he visited Lucy and applied his mind control to her. On unknown motivation, he compelled she to make friends with Maggie again and to reconcile her with Parker. Every time Alastor left her field of vision, she forgot about the existence of the supernatural world and the conversations with him, but she unconsciously continued to obey Alastor's orders.
At the end of the episode, Lucy is then revealed to be Skyping with Alastor, who has control over her mind and wants Lucy to get Parker and Maggie back together. He tells her she needs to hurry, and make sure they fall back in love.

In "Memento Mori", Charity's murder of the Elders is exposed. When she is about to be sent to Tartarus as punishment for her crimes, Alastor found his way to her and killed the escorting guards. Charity feared that he was there to kill her and winced. But Alastor simply freed her and took her away.

In "Source Material", Alastor forces Charity to turn herself in so that she may enter Tartarus to retrieve both Hunter and the Harbinger. After she returned from Tartarus, Alastor caught her scrying for her sister Fiona Callahan. He mesmerized her to tell him what she was doing; she revealed that her sister was the Keeper of the Sacred Flame and was looking for the Origin Dagger, which Alastor needed for Parker to become the Source. After the Charmed Ones' battle with Fiona, Alastor went to the crypt and found the dagger.

In "Ambush", Alastor found Fiona back at the crypt. She told him that she was the "Steward of the Source of All Evil", an alternate title of the Keeper of the Sacred Flame. This revelation made Fiona and Alastor form an alliance. Alastor sent Hunter to kill the Elders and have the Charmed Ones vanquish him so that the Harbinger of Hell (which was resting within him) would be released airborne.

In "Red Rain", Alastor sent Parker to kill Charity Callahan, the last of the Elders, but he failed. He later kidnapped Maggie to blackmail Parker into becoming the Source. However, Macy thwarted his plan by taking Parker's place and becoming the host for the Source instead. Alastor was at first estatic to be in the presence of the Source, but Macy, with the Source's enhanced power, vanquished him on the spot.

In "The Source Awakens", Alastor's belongings were inherited to Parker, who left town to find ways to regain control over his resurfaced demon side.

In "The Truth about Kat and Dogs", TBA

In "Past is Present", TBA

In "The Rules of Engagement", TBA

Alastor was conniving, manipulative, and impatient who could pose as a gentleman. He didn't seem to keep the promises he made (at least towards those who disappointed him).

Despite that, he did seem to have some concern for his elder son, Hunter.

In his human form, Alastor was a handsome middle-aged white man with marine-cut brown hair, dark blue eyes, and stubble.

In his demonic form, he had a bald skull, magma-like skin, glowing red eyes, and sharp fangs instead of regular teeth. 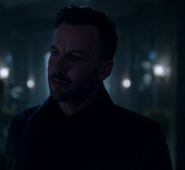