To drain a being's powers and the powers of their bloodline

Power Absorption
The Amulet of Archangels is a magical amulet that can drain the powers of the wearer and their entire bloodline. There is an entry on this in the Vera Book of Shadows.

Originally, the fallen archangel Belial used this amulet to steal the powers of all the other archangels. Somehow, up to the 21st century it came to the custody of the catholic church in Bucharest, Romania.

In Jingle Hell, at the orders of their father, Hunter and Parker Caine stole this amulet from the church. They attempted to use it to steal the powers of the Charmed Ones by gifting it to Maggie Vera. However, it was later taken off of her by Parker, when he began having second thoughts due to his feelings toward her. It is eventually destroyed by Parker.

The Amulet can take any form shifting to appear fashionable to Seduce its Intended wearer. The last known wearer was Vladimir Ghika during the mid 10th century. Many believe its now in the hands of the Catholic Church.

Origin: hebrew in origin found in Abrahamian texts the fallen archangel Belial used the Amulet as a conduit to thieve the powers of the Archangels and delivered them to Lucifer.

Use: to portion abilities and powers from supernatural beings.

Main attributes: to drain and steal supernatural powers from wear and entire Bloodline. Most texts note that the Amulet usually appears lighter in color, and when darkened, has successfully drained all powers from wearer and their Bloodline.
The Amulet builds a kinetic energy from the one wears it... There’s no incantation needed to enact the amulet. The draining powers take time so keep close ... 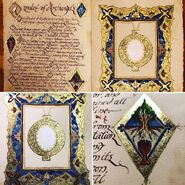 The Amulet on the remains of Saint Dragos

Darkened amulet
Add a photo to this gallery
Retrieved from "https://charmed-reboot.fandom.com/wiki/Amulet_of_Archangels?oldid=35006"
Community content is available under CC-BY-SA unless otherwise noted.