A STICKY SITUATION — While on the hunt for Jada (guest star Aleyse Shannon), Mel (Melonie Diaz) scours The Book of Shadows as Harry (Rupert Evans) and Charity (guest star Virginia Williams) cross-reference them to find any clues that might lead them to this new demon. As if that isn't enough, they discover that there is a Changeling Demon on the loose that puts one of the sisters in danger. Elsewhere, Maggie (Sarah Jeffery) signs up for a job helping to market a new dating app which could land her a summer internship. Macy (Madeleine Mantock) decides to go outside her comfort zone after a little encouragement from Maggie. Meanwhile, Mel is given a task by the Elders that she was not expecting. Ser'Darius Blain and Nick Hargrove also star.

The episode kicks off with the sisters facing the mysterious, electricity-wielding scythe thief from the previous episode. They may have the Power of Three but their burgeoning magic is no match for the thief, whose ability to teleport and perform magic leaves them completely off-guard. The sisters retreat, but not before the demon uses the scythe to open the portal to Tartarus, releasing one of its evil residents.

With the scythe out of their hands and a mysterious demon on the loose, the sisters do something completely out of character thus far and call upon the Elders for back-up. However, Maggie and Macy have real-world business to attend to, leaving Mel, Harry, and resident Elder liaison Charity to get to the bottom of this scythe-theft business.

Having finally chosen a major, Maggie is now scouting out internship possibilities, volunteering as a recruiter for a dating app start-up in the hopes of landing an internship in Chicago. While Parker attempts to woo her into interning with him at his father’s company in Chicago instead, Maggie turns down his offer of unlimited summer makeout sessions, wanting to earn an internship on her own.

However, Maggie’s rejection of nepotism proves to be a major foil for Alastair’s nefarious plans. An exposition dump in the form of a big bad meet-up between Alastair and his sons gives us a little bit of background on Parker’s mysterious illness — and exactly what his demon father’s biogenetic plans are. Half-demon, half-human, it seems Parker’s demonic side is killing his human side and Alastair is working on a serum that would cure, or at least help, Parker with this bonkers and probably painful situation. Unfortunately, they need Maggie’s plasma to make the serum and Alastair implores him to find another way to get it as company drug tests are now off the table. It remains to be seen how the Harbinger of Hell plays into all of this, but I’m sure we’ll find out soon enough.

Mel, Harry, and Charity don’t get far in their investigation into the electric demon before their police scanner picks up a missing persons report. The trio investigate and upon seeing evidence of demonic activity, and with no other demons on their radar, they become wary of their mysterious foe.

Mel is taking out the trash at The Haunt when she’s approached by the electric demon, Jada, who reveals she’s not a demon after all but rather is half-witch, half-Whitelighter. Jada informs Mel that she’s part of the Sisters of Arcana — also known as Sarcana — a rogue group of witches who don’t follow the Elders’ orders. She shares that despite being an Elder, Mel’s mom was an ally to the group, adding that Mel is just the type of person they’re looking for. As a peace offering, Jada gives Mel a shard of the scythe and reveals she already used it to release a powerful witch from Tartarus.

Back at the house, Mel confronts Charity about the Sarcana. The mention of the group clearly rattles Charity, who tells Mel they’re a group of terrorists originally founded by an Elder. Later, Harry joins a still-shaken Charity on the back steps. Sarcana resurfacing is clearly a touchy subject for both as they mourn a mysterious “her” and very nearly have a moment.

After essentially being informed by the priestess that she and Galvin can never be together due to the protection spell on him, Macy has resigned herself to being married to her work. However, even her boss thinks she needs to get a life outside the lab and Maggie couldn’t agree more, pushing for Mace to get on the dating app she’s been promoting. Meanwhile, Galvin has been having a rough week in the lab, snapping at Macy like she’s not his friend and, more importantly, his boss. After she calls out his behavior, he apologizes, revealing that he and Summer broke up and Dr. Warner also cut funding on his long-running research project. So he’s feeling a bit down — but more importantly, Galvin is single again!

During a date with Maggie, Parker’s not looking too great and Maggie is very concerned for her new boyfriend, who, as far as she is concerned, has a rare autoimmune disease. Hunter confronts him in the bathroom, reminding his little brother of his mission, which is not to fall for one of the Charmed Ones. Parker ensures his brother that he’s got a plan all worked out and upon returning to the table, he tells Maggie that he needs a plasma transfusion. When he asks if she’ll get tested as a potential match, she enthusiastically agrees.

Meanwhile, the lovey-dovey college couple sitting at the table next to them walk through the parking lot, where the woman can’t help but point out what a perfect match they appear to be. But as they begin kissing, the man reveals himself to be an insect-like demon and kidnaps her. It’s all pretty horrifying.

Remember Fiona, Harry’s former charge whose recklessness ultimately led to her death? It turns out we didn’t get the full story from the Whitelighter on Halloween and it comes with a pretty interesting twist. In the attic, Harry warns Mel about the Sacana, revealing that Fiona was actually the younger sister of Charity — and presumably the mysterious “her” — who was encouraged by the Sacana to use her magic publicly. However, when things went south for her and she was deemed criminally insane and locked up, the group did nothing to help her. After some prodding by Mel, Harry also admits that the fallout led to his and Charity’s break-up, but more importantly, he urges Mel not to fall into the outlaw group’s trap.

Interrupting their heart to heart, Maggie bursts in suggests they get back to business. They’re able to work out quickly that the demons kidnapping students are insects looking for their perfect human mate — and that Maggie’s app is leading them to their targets. Horrified, Maggie reveals that Macy is on a date…with someone from the app.

Macy is clearly having a lovely time — until her date reveals himself to be an insect-like creature and kidnaps her mid-kiss. Flanked by Mel and Harry, Maggie bursts into the Aptitude headquarters, where the trio find Macy and the rest of the demons’ victims in a basement-turned-human breeding ground. They free Macy, who uses her telekinetic powers to kill the queen and free the rest of the victims.

While her harrowing experience would be enough to deter anyone from ever going on another date, Macy admits that she needs to find a work-life balance…but not with a dating app. Instead, she confesses that she still likes Galvin and protection spell or no, she wants to go for it.

Maggie, meanwhile, goes to see Parker, telling him that not only did she donate plasma, she also got Mel to do so, playing even further into Alastair’s evil plans. Mel and Jada have another encounter outside The Haunt and it appears Jada hasn’t given up trying to recruit Mel to join the Sacana, telling her to find her when she’s ready.

Rattled by Jada’s persistence, Mel summons Charity, who invites her through a portal to a different dimension to meet the other Elders. Even though their faces are obscured for security reasons, being in the presence of the entire Elder Council feels like a pretty big deal within Charmed’s magical realm. Charity reveals that the Elders think the Sacana killed her mother along with the other murdered Elders and the council wants Mel to infiltrate the rogue group. Mel goes to a tattoo shop to seek out Jada but she’s almost immediately knocked out by another sister, who tells her that she nearly saw Fiona! Either Harry hasn’t told the full story or this about to take another major turn.

At The Haunt, Macy shoots her shot with Galvin and invites him out for drinks. But just as he’s heading out to meet her, Galvin gets hit by a car — his protection mark glowing brightly. It seems it’s going to take more than Macy’s persistence to beat the spell. 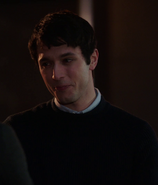 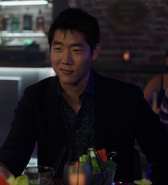 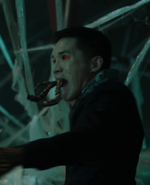 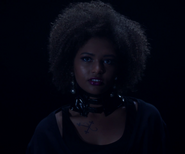 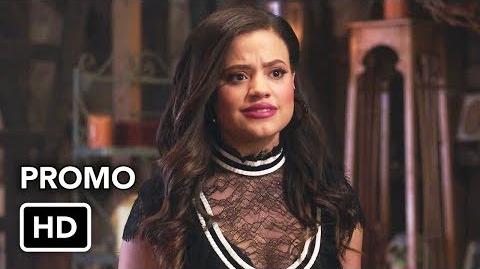 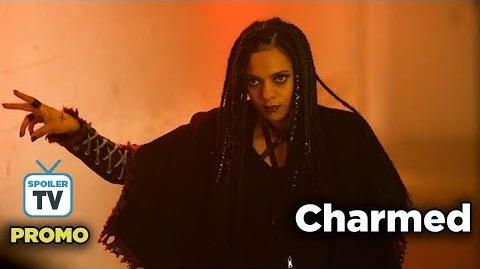 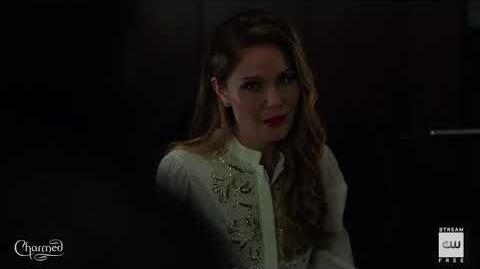 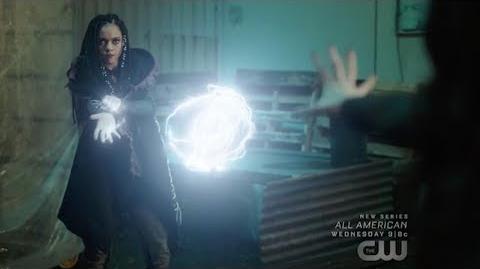 Charm Reboot - Powers (1x08)
Add a photo to this gallery

Retrieved from "https://charmed-reboot.fandom.com/wiki/Bug_a_Boo?oldid=45661"
Community content is available under CC-BY-SA unless otherwise noted.