Calling Upon Your Necromancer

Summoning the Necromancer responsible for resurrecting the user

Neutral
Calling Upon Your Necromancer is a ritual used to summon the Necromancer who resurrected the user. Macy found this ritual in a book about resurrection.

In "You're Dead to Me", away from her sisters and Harry, Macy held the ritual in the attic of their house. She brought a white mouse from her job as a sacrifice. The ritual was performed correctly and the Necromancer that had brought her back to life, Knansie, emerged from a portal of blood.

Entry in the book

Those walk among us, the living dead, the resurrected, and the undead may call upon a Necromancer. To do this you'll need the proper ingredients listed and must carry out the instructions with care and order. Any mistake may incur a Deadly Consequence.

With melt wax, draw a pentagram large enough to allow you to sit or la.. the middle without strain.
Place each candle, whispering: “Esta Semper Lux”.
As you light each wick. This will allow the candle flame to burn without interruption.

A using a tool:
Repete the incantation at the moment that the tool will pierce the animal sacrifice in question.

Once ritual is complete:
A pool of blood in your vicinity will appear.
Once your Necromancer appears their portal will close and blood of life will return to sacrifice.

I summon the one who brought me back,
hear my plea,
I call you here as you called me from beyond! 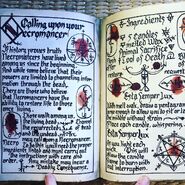 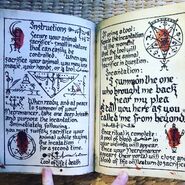 Retrieved from "https://charmed-reboot.fandom.com/wiki/Calling_Upon_Your_Necromancer?oldid=40434"
Community content is available under CC-BY-SA unless otherwise noted.