Careful What You Witch For

Careful What You Witch For

THE STRUGGLE IS REAL ⁠— While Mel (Melonie Diaz) and Harry (Rupert Evans) try to crack the Book of Elders, Macy (Madeleine Mantock) struggles with the good and bad aspects of her demon side. Maggie (Sarah Jeffery) competes with Jordan (Jordan Donica) for a promotion. Macy ventures out alone and meets an injured and terrified witch named Abigael (Poppy Drayton). Mel and Harry visit another dimension.

Trying to avoid sleep, Macy went to help a witch on her own. She found Abigael on a train hiding from demons. The demons kidnapped Macy with Abigael and kept them in a magic-suppressing cage. They escaped by electrocuting one of their captors. To keep her safe, Macy brought Abigael back to the command center, blindfolded. Unfortunately, when Abigael touched the book, just like with Macy, it repelled her. Abigael claimed that she was a witch but had a demon parent.

Callum, a demon of the four bloodlines tracked them to SafeSpace. Macy believed him to be the Overlord. Abigael and Macy killed him, but not before Callum expressed that he thought Abigael was the Overlord. As Abigael was about to leave through a portal, Macy confronted Abigael about Callum’s words. Abigael tried to kill Macy, but Macy got the dagger away from her. Macy was about to kill her, when Abigael pointed out that she had a green scar, just like Macy. The assassin had hunted her too.

Regarding deciphering the Book of Elders, they caught a break when Harry recognized the symbol for the Sentinel, who lived in the astral plane. Mel and Harry needed to reach it, but they needed a human anchor to meditate with them for five hours. They enlisted Katrina’s help, though she wasn’t aware she was part of a spell. The Sentinel explained that the Elders offered him a deal; if he agreed to serve as Sentinel for the Book, his wife and children would survive smallpox. The Sentinel tested them when they asked for their powers back. Mel realized that they were still in the astral plane

Though Maggie had landed the receptionist job and gotten access to the command center room in SafeSpace, increased security meant that they were changing access levels. Maggie decided to try for the assistant manager position available. Unfortunately, without much experience, it proved to be difficult. What’s more, Jordan was also going for the position. He was friends with the hiring manager and had more experience. Maggie needed an edge, so Abigael suggested a spell to help her influence the manager. She was able to get the job, but Jordan had to close his boxing gym business as he wasn’t making enough money.

In the command center, Macy and Abigael have a chat. After realizing Abigael is using her, Macy pins Abigael down but soon realizes that the man hunting her is hunting Abigael as well.

Maggie: "I've seen things, Jordan. Things that would make a grown man cry. Even a very grown one. Like you."

The Sentinel: "Just remember, nothing in life or death is without consequence."

The Sentinel: "To be fair, the Book of Elders contains the greatest secrets and spells in all of witchcraft. Old magic. Dead magic. Healing magic. Dangerous magic..."

Macy (to Abigael): "I trusted you the first time. I will not make that mistake again." 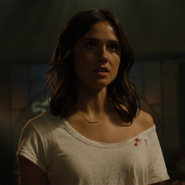