Emily Bader
Chloe is a woodland pixie whose external heart was stolen by a mortal named Zack, who forced her to go after all white male students in his film class for his own agenda. Chloe killed one of the students and committed two murder attempts during her mission before finally being freed of Zack's control by the Charmed Ones.

Chloe was trapped by Zack, a film student who was desperate to become the best filmmaker of the generation. He stole Chloe's external heart, placing her under his control and made her go after the white male students in his class and make them either drop out of class or kill them.

In "Manic Pixie Nightmare", a mortal named Judd was magically enchanted by Chloe. She tried to convince Judd to drop out of class to go on a tour with her. When he refused, she influenced him with pixie dust to jump off a building with her. Judd live-streamed the whole event as it happened and he plummeted to his death while Chloe flew away. She almost killed Noah and Parker, but Noah survived and Parker was saved by Maggie.

When the sisters realized she was the culprit, they set a trap to trap her. She fell into the trap momentarily, but escaped by hypnotizing Harry and made him help her. After escaping back to the film department, Zack tried to use a spell in the stolen Book of Shadows to make his wish come true, but the sisters arrived and stopped him. While Mel went after Zack, and Maggie and Parker Harry, Macy went after Chloe to stop her. However, she was too fast for her. Mel managed to steal back Chloe's heart and make her go after Zack instead. Chloe made him knock himself out by sending pixie dust in his direction. After Mel gave Chloe back her heart, Chloe was guilt stricken by what happened. The sisters then suggested she team up with the other pixies so they could figure out where to hide their hearts so this kind of incident could never repeat itself.

In "The Source Awakens", Chloe was among a group of magical beings that visited the Charmed Ones to congratulate them for saving the world and to contemplate who would be in charge of the magical world now that the Elders were dead.

Being a pixie, Chloe is naturally cheerful and kind, does her best to live her life. She enjoys making candles, walking dogs and making cupcakes.

In her human appearance, Chloe takes the form of a young, white woman with brown hair and hazel eyes.

—Chloe as she uses pixie dust on Judd in Manic Pixie Nightmare.

"Do you want to feel alive, too? Let's go splash in puddles right in the middle of the street."

—Chloe to the Charmed Ones in Manic Pixie Nightmare. 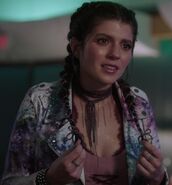 Retrieved from "https://charmed-reboot.fandom.com/wiki/Chloe?oldid=47395"
Community content is available under CC-BY-SA unless otherwise noted.