Claw Extension is the power to make sharp claws extend out of one's hands and/or fingers. Some beings naturally possess claws.

All of the monsters created by the magical experiments of the Faction have possessed claws in some shape or form. The first monster had large arms with sharp claws, presumably through the magic from a Lycanthrope that had been used in its creation[2], and the second monster had fingernails that were sharpened out into long claws that seemed to secrete a powerful, deadly venom.[3]

Lee, a demon and a carnal, has the ability to transform at least one of her fingers into a long claw resembling a bee's stinger. [4] 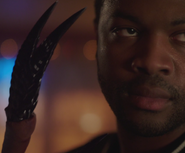 Retrieved from "https://charmed-reboot.fandom.com/wiki/Claw_Extension?oldid=44087"
Community content is available under CC-BY-SA unless otherwise noted.