Marisol Vera (Mother of his Children) †

You're Dead to Me (Flashback)

Don't Look Back in Anger (Flashback)

Dexter Vaughn was the biological father of Charmed Ones, Macy Vaughn and Maggie Vera, and was a former lover of Marisol Vera.

At some point, Dexter met and fell in love with Marisol Vera and was aware that she was a witch. They conceived their first-born daughter, Macy Vaughn, together who turned out to be a stillborn, although they resurrected her with necromancy.

When Macy was two years old, Marisol sent them both since their time as a family was up per the necromancer's deal. After lying to Macy about her mother passing away, he went on to raise her by himself.

He and Marisol kept in touch via letters. Since Marisol's husband, Ray, was often away for work, she was left at home to care for Mel. This made her lonely and ultimately reconnected with Dexter. Together, they conceived Maggie Vera during New Years of 2000, whom he was aware of.﻿ Ray became aware of the affair, eventually leading down to his divorce with Marisol.

He sent Macy to boarding school in ninth grade. When Macy was twenty years old and indecisive about her career goals, she accidentally shot fire out of her hands. That night, she told Dexter about it. Dexter in turn reached out to Marisol and arranged a meeting for them, using a blanket to keep the two from seeing each other. When Macy tried to rip it off, Dexter stopped her and waited until she calmed down before leaving the room.

He passed away in 2016, and Macy had been living on her own until she united with her sisters.

According to Macy, Dexter was very strict and direct, never one to talk about emotions. He taught Macy to be independent. 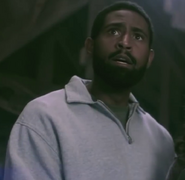 Retrieved from "https://charmed-reboot.fandom.com/wiki/Dexter_Vaughn?oldid=45173"
Community content is available under CC-BY-SA unless otherwise noted.