Don't Look Back in Anger

PAST AND PRESENT – An urgent problem leads Mel (Melonie Diaz) and Maggie (Sarah Jeffery) to seek help from their father, while Macy (Madeleine Mantock) discovers a shocking secret about her past. Also starring Rupert Evans and Jordan Donica.

The sisters are trying to tell Harry who he really is. He doesn’t remove anything and insists he is Jimmy. All he can remember is the phrase “a forty stone parasite.” The sisters have no idea what that is. Jimmy wants out so the sisters put a spell on him so he can’t leave. Mel thinks their dad can help. Maggie is annoyed, she didn’t know they were talking. Suddenly, she feels sick and collapses.

Harry continues to try and escalate his bubble while Macy whips up a potion. They talk, she keeps trying to tell him who he is and how he is a good man. They were a team.

Maggie is stable, telling Mel that her arms felt like they were on fire. Ray calls. Mel heads to meet him in Cancun.

Macy tells Harry she needs to rub a potion on him. He can’t run. The spell will help with his memory. Macy starts to put the potion on him when she is blown back. She comes to for a second before falling into another realm, she is performing on stage, singing to a crowd.

Harry works to wake Macy but she is unconscious on the floor. Maggie is back home. Mel and Ray arrive.

Harry looks like he may be making a run for it when he sees a picture of him and the sisters around the house. Meanwhile, Macy is in another realm when she uses her powers to push away a guy who is hitting on her at the bar. She looks surprised by her powers.

In search of the forty parasites, Mel and Ray take off to Brazil. Maggie tells them she is sitting this one out. Harry goes back to help Macy. In her other world, Macy is being yelled at by her father for coming home so late and not having focus. She sits and cries. She tells her dad some guy hit on her at the bar and she lost control. Fire came out of her hands. She thinks she is crazy. He tells her she is tired. She wakes later that night to her Dad on the phone telling someone what they thought would happen to Macy finally happened.

Mel and Ray are back. Maggie has been looking into forty stone parasites. Harry was delirious. What he was telling them about was an abandoned power plant.

Jordan calls Macy to check on Maggie. Harry answers and he is confused as to how to use the phone. He is yelling when Macy starts to convulse, Jordan tells him he will be right there.

Ray, Mel, and Maggie arrive at the power plant they believe the faction is using. On their walk to the plant, Maggie starts to have a panic attack.

In the other realm, Macy’s dad brings her into the living room. There is a sheet hanging. Someone is on the other side. She begins to talk to Macy. It is her mother. She lunges at the sheet. Her dad stops her. She cannot do that because of the necromancer who put a spell on them, forcing them to be apart.

Jordan arrives to see Harry. He is holding Macy who looks at peace like she is dreaming. Meanwhile, Maggie finally tells Mel about her panic attack. Ray shares that when she was a kid she had them. She gets upset. All the lies in their family is horrible. She begins to yell at them when her powers expand and take out the guards. Ray tells her they need to get into the plant and when they get home he will help fill in the missing pieces of her life.

Macy isn’t breathing. Jordan tries to save her while her mom talks to her through the other side of the sheet about controlling her emotions. Her mom leaves.

While trying to save Macy, Jordan notices a cut on Harry. They realize that the only way to save Macy is to cut the thing out of Harry’s neck. Harry doesn’t want to but then offers himself up to save Macy,

Ray, Mel, and Maggie get inside the plant and pretend they are there for a demo. Jordan cuts a chip out of Harry’s neck. Harry returns to his normal self while Macy awakes. Harry knows Maggie and Mel are in trouble.

Maggie, Mel, and Ray end up in lockdown. Men move in with guns. Julian arrives. They escape as fast as they can. He must know who and what they are now.

The sisters talk. Macy tells them what she learned. She cries. She saw Harry and he was sweet and kind. They all decide they are going to take Julian down.

Ray is waiting for Maggie. He tells her he loves her and she is his daughter. It doesn’t matter if she isn’t his biological daughter. Macy goes to see Harry. She is fine now. She has clarity and she doesn’t want to overthink anymore about them. They dance and kiss, laughing.

Maggie (to Ray and Mel): I am pissed. And I am hurt. And I'm tired of pretending that I'm not.

Jordan: Having a panic attack doesn't mean you're weak. It just means you're human. 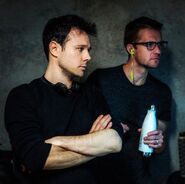 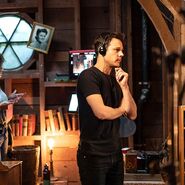 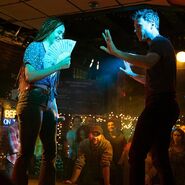 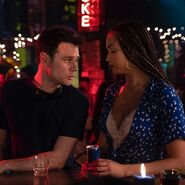 Charm Reboot - Powers (2x18)
Add a photo to this gallery

Retrieved from "https://charmed-reboot.fandom.com/wiki/Don%27t_Look_Back_in_Anger?oldid=45295"
Community content is available under CC-BY-SA unless otherwise noted.