Elemental Mimicry, also referred to as Elemental Transformation, is the power to take the form of a specific natural element. The users of this ability tend to have one form that they can turn into. The known elemental forms that users are shown to possess are ice/frost, smoke, or shadow.

This power allows the user to imitate an element for a variety of purposes. Most use their elemental form for stealth and to infiltrate hard-to-reach places but some can use their power offensively to weaken their enemies.

This form allows a user to turn into a body of frost, allowing them to fill up a room and lower the temperature. The demon, Taydeus, used this power to separate the Charmed Ones, obscure their vision, and make it hard for them to breathe.

This form allows a user to turn themself into a mass of shadows, letting them become intangible and walk through solid matter. This is the form that all Shadow Demons possess and is the form of the half-demon, Parker. 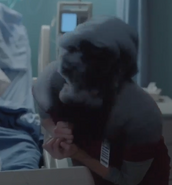 Retrieved from "https://charmed-reboot.fandom.com/wiki/Elemental_Mimicry?oldid=46462"
Community content is available under CC-BY-SA unless otherwise noted.