STRONGER THAN YOU KNOW — While waiting for the Elders to arrive, the sisters’ patience is growing thin as they keep a watchful eye on their new charge. Once one of the Elders, Charity (guest star Virginia Williams), appears, she gives specific instructions on how to handle the situation. Mel (Melonie Diaz) does not agree with the solution and enlists Maggie (Sarah Jeffery) and Macy’s (Madeleine Mantock) and even Harry’s (Rupert Evans) help, but it means going against the Elders. Meanwhile, Macy, Mel and Maggie are all starting to realize that juggling their two worlds is becoming more difficult. Ser'Darius Blain and Ellen Tamaki also star.[1]

We open the episode with a flashback set six months earlier, where Mel is encouraging Angela to come forward with her sexual harassment allegations against Professor Thaine. Marisol promises Angela that the Vera family will support her regardless.

Back in present day, it has been two days of babysitting the Harbinger of Hell in their attic leaving the Charmed Ones frustrated that the Elders are taking their time getting it out of their hands. Even Harry is surprised about why they haven't arrived yet. But suddenly Niko and her partner Trip drop by for a surprise visit as part of their investigation into Angela’s disappearance. Mel, Macy and Maggie are so unconvincing in their attempts to assure them they know nothing. But when strange noises are heard coming from their attic, it leaves them, especially Trip more suspicious. Luckily just in time, an Elder shows up to help cover their tracks.

The sisters are surprised to see the Elder, Charity is nothing like what they expected her to be. Thinking her to be some old person. She reveals she spends her non-Elder time running an investment fund helping women in developing nations start businesses. She drops a huge bombshell, that the Elders think Angela cannot be saved and has instructed the Charmed Ones with the task to destroy the Harbinger of Hell in a ritual that must be performed that night during the full moon or run risk of the Harbinger becoming too powerful to destroy. Mel is outraged at Charity’s attitude towards killing a human being and tells Harry and the Elder how she really feels. Charity also reveals her delayed arrival was because of another Elder assassination, increasing the total to three since their mother was killed. The Elders want to eliminate the Harbinger and whatever human vessel it currently has before more witches are killed.

The sisters are in complete surprise and shock to learn their mother was an Elder, something they thought Harry should have mentioned. They learn their mother and Charity were close friends. Mel is more determined than ever with saving Angela, with her belief that their mother would never allow Angela to be killed. However, Macy disagrees and supports the Elder’s decision.

Maggie is finishing up one of her freshman classes. Maggie struggles with her witch duties, Kappa priorities and has very little time for academics, which leaves her at risk of failing. Unless she can pass the midterm — on Dante’s Divine Comedy. Lucy and her boyfriend, Parker, also take the same class and Lucy kindly offers up Parker to help as her new tutor.

Macy is in the lab where she runs into Galvin. The two have a very pleasant and romantic chat about utilitarianism. Still heated from her argument with her sisters, she poses the quandary to Galvin as a hypothetical question and is surprised when he says he doesn’t think he could kill the threat if there was a chance they could be saved. Galvin reminds Macy that emotions can be just as important before suddenly changing the conversation to asking her to the homecoming. Unfortunately, Macy turns him down.

Meanwhile, in the attic, Mel tries to find proof that Angela’s soul hasn’t been destroyed and is able to do so with some help from the Book of Shadows. However, this newfound information has no impact at all on Charity, who warns Mel that it is still too dangerous to even attempt to save Angela. Mel takes matters into her own hands and secretly takes the Harbinger out of the attic and into the warehouse housing the Kappa homecoming float.

When Charity arrives with Macy and Harry, she is angry to find an empty and that Mel would disobey orders to which Harry points out how he feels dealing with Mel.

In the warehouse, Mel and Maggie are planning their exorcism but cannot continue when the Book of Shadows leads them to a blank page. Harry arrives and urges them to take the Harbinger back to the attic and proceed to move forward with the Elders’ plan.

Back at the Vera Manor attic, Charity and Macy have a deep conversation. When Macy asks if her mother mentioned Macy’s existence to Charity or any other Elders. Charity reveals that Macy’s existence now makes sense to her, especially remembering something that Marisol asked her to help her do years ago, to perform a very brutal and painful spell on her, which would lift the pain Marisol was obviously feeling over the terrible loss. But still leaving many holes into the mystery of why Marisol left Macy. Following the conversation, Macy excuses herself and is secretly going off to the warehouse to help her sisters.

With Macy arriving at the warehouse, together the three sisters learn the blank page in the Book of Shadows reveals a spell written in Spanish with each of their names written at the top. Harry figures out that Marisol created the unsanctioned spell because she knew they would find themselves in this scenario, revealing that her power was prophecy. Harry finally believes they are doing the right thing and trusts Marisol's judgment.

Suddenly, a car is heard, and when Maggie goes to investigate, she finds Parker looking to stash a box of illegal fireworks in the warehouse for homecoming. But when Park almost spots Angela, Maggie kisses him and then awkwardly sends him on his way.

The containment spell Charity had placed on Angela has worn off and she’s about to attack Harry when he has Maggie summon Charity quickly. The Charmed Ones refuse to go forward with the ritual killing in favor of their mother’s plan. Even Harry pleads with Charity to trust Marisol. Charity agrees. As Harry and Charity hold the Harbinger back, the sisters perform the spell, and with Maggie using her power to have a telepathic conversation with Angela's soul, they are able to save Angela and contain the essence of the Harbinger in an empty paint can. However, Trip, who had been trailing Mel and Maggie stumbles on the scene and is killed after being struck by a pole caught up in the whirlwind for the spell to save Angela. Trip's death deeply affects Mel, who feels responsible for having not kept him away.

The sister’s craft a story as to how Angela ended up in their house with no recollection of the past week. Later, Harry tells the sisters they are finally done with the Harbinger as Charity is taking it somewhere for safe keeping. The mention of Charity prompts Maggie to ask Harry for details about his life, but he won’t reveal anything other than he was born in 1920. He says despite Charity’s support, they defied orders from the Elders, meaning there will be consequences for their actions.

Parker comes over to help study with Maggie, who brushes him off and tells him she doesn't think this is a good idea. Niko meanwhile is devastated over the loss of her partner and close friend.

The episode ends, with Charity walking into a lift, and an unknown demon uses mind control powers to get Charity to switch the paint tins with him , she hands over the can containing the Harbinger with no memory of what happened. Leaving the fate of the apocalypse still in motion.

Angela Wu: "People will hate me."

Marisol Vera: "Some people will, sure, but the others will be inspired by you to speak up for themselves."

Angela Wu: "I heard rumors about the jerk since I was an undergrad."

Angela Wu: "So you're saying I should report him? "

Mel: "Hell yes. Think of it this way: if you don't, he'll just keep doing this to other women."

Marisol Vera: "You need to make that decision for yourself. And no matter what you decide, I will be here to support you, because you're not alone."

Maggie: " Is it weird I don't even find it disturbing when Harbie speaks anymore? This whole scenario has been normalized."

Mel: "I blame the President."

Maggie: "I'm supposed to be cramming for my midterm, not maybe dying from a demon virus."

Harry: "For pity's sake, you'd think with such frequent visits from an Englishman, you could at least stock your pantry with tea that isn't absolute rubbish. 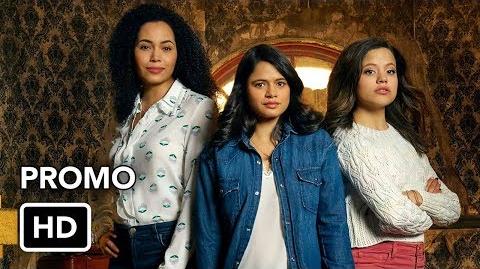 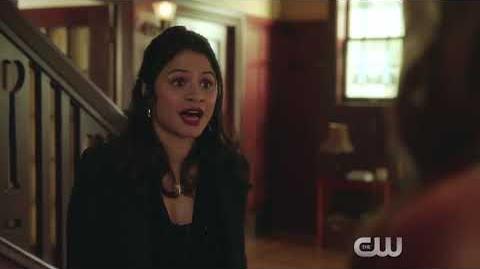 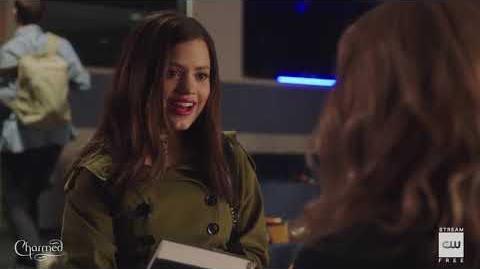 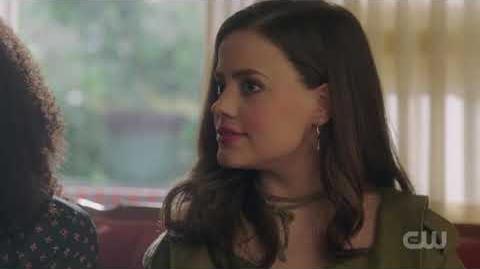 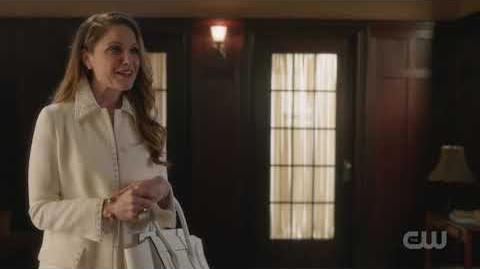 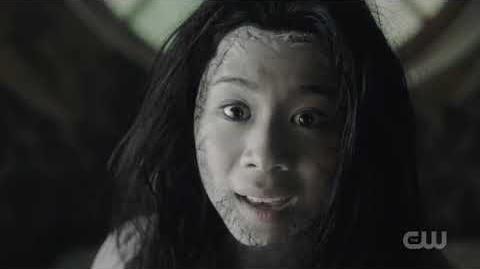 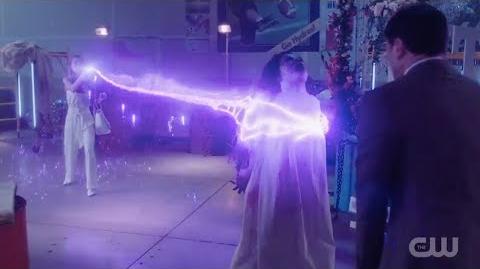 Retrieved from "https://charmed-reboot.fandom.com/wiki/Exorcise_Your_Demons?oldid=38339"
Community content is available under CC-BY-SA unless otherwise noted.