Exorcising the Harbinger of Hell from its vessel

The Exorcism Ritual was a ritual that was created by Marisol Vera who prophesized that her daughters would need it to save the life of Angela Wu, whom had been possessed by the Harbinger of Hell.

The objective of this spell is to separate the Harbinger from its human vessel ~ restoring the humans soul and trapping the Harbinger in its primordial form.
If the full moon is reaching full strength, extra magical and physical protections may need to be taken before spell is performed.
Instructions - This spell requires an enchanted vessel to trap the Harbinger once it's exorcise. Whomever contains the Harbinger will become the only being able to release it from its entrapment. the Charmed Ones must lay hands on the Harbinger's host and recite the following.

(after the lines of spell at the bottom there is a note)
Once complete, the human vessel be free! 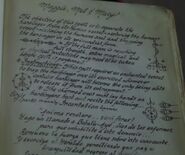 Retrieved from "https://charmed-reboot.fandom.com/wiki/Exorcism_Ritual?oldid=36010"
Community content is available under CC-BY-SA unless otherwise noted.