Fiona Callahan was an extremely powerful witch who was the younger sister of Charity Callahan and a former charge of Harry Greenwood's. Through unknown circumstances, she became known as "the Keeper of The Sacred Flame", a primordial source of power that is actually the source of all of magic itself. Fiona was imprisoned in Tartarus by the Elders, as they felt intimidated because she had befriended the Sarcana. She was in there for around a decade until Jada Shields freed her with the use of the Scythe of Tartarus.

After regaining her strength, Fiona then turned on the Sarcana, decimating the coven of witches and even killing her own sister. She planned to raise the Source in order to kill the host and destroy all of magic. However, she was ultimately killed upon igniting the Sacred Flame, as her immortality had been stripped by Macy Vaughn.

According to Harry, Fiona revealed her magic to the wrong mortal. She was subsequently institutionalized and came to believe that she was insane, rather than truly possessing magical abilities.[2]

She was said to have committed suicide until it was revealed that she was alive and a member of the Sarcana in late 2018, having been released from Tartarus after having been imprisoned there by the Elders around a decade earlier.

After stealing the scythe in the previous episode, Jada Shields used a spell to release Fiona from Tartarus with the Scythe of Tartarus.

Later, Mel Vera found the Sarcana lair, but she got hit on the head by Aliya before she discovered Fiona.

The Sarcana were attempting to heal Fiona with hellflame in an incubator, but they did not have enough to fully restore her. Mel finally sees her unconscious body, but the Sarcana still don't tell her that this witch is Fiona, and only refer to her as the Keeper of the Sacred Flame. Mel later finds more hellflame to help her.

Touched by a Demon

Fiona wakes up from her slumber when Maggie and Parker discover a secret room underneath Vera Manor.

Still partially bedridden Fiona meets Mel who she initially mistakes for Marisol before Jada tells her that's Marisol's daughter instead. Fiona guesses Maggie (unknowingly correct due to the fact that Mel switched bodies with Maggie) however Mel corrects Fiona's mistake and learns that Fiona is not willing to reconnect with her sister even let alone let her know she's alive due to their unresolved issues which Maggie as Mel finds extremely sad before leaving Fiona to get more rest.

Fiona portals into the manor after Charity has her powers stripped. Harry is both shocked and thrilled to see that she was alive, though she asks for a moment alone with her sister. Charity is at first expecting a happy reunion, though Fiona tells her that it is she who is destined for "greatness" and then she says that the Vortex Viribus is meant for her. She then leaves Charity "to enjoy Tartarus."

Fiona tried to extract Harry's knowledge in order to locate the Origin Dagger, which was the tool needed to control the Sacred Flame. Unfortunately, she was unable to extract the map from his mind since he was powerless and mortal at the time. Fiona later convinced the Charmed Ones to let her take Harry so she could help him. She brought him to the Vortex Viribus, where she restored his powers and revealed the map in his mind, but she was still unable to take the knowledge. Seeing no other choice, Fiona had Harry under her control.

Mel visited the Mystic Mayhem Tattoo Parlor, where she found the Sarcana massacred. Jada Shields was the only survivor. She told her Fiona came and massacred all of them.

Tessa Flores-Cohen and the Charmed Ones found Fiona and Harry in a crypt, where Fiona had a Control Shackle wrapped around Harry's neck to control him. She tried to find the Origin Dagger, but failed to do so. During a battle between the witches, Tessa sacrificed herself to protect Mel. Fiona ordered Harry to kill Maggie and Mel, but they set him free. Deciding to take on them herself, Fiona tried to attack, but they were able to deflect her power, prompting her to retrieve.

Macy cast a spell to strip Fiona's immortality. After a long and hard struggle, she succeeded. Right after doing so, Alastor appeared and convinced her to work with him. After hearing the Elders had fallen, Fiona went after Charity, her own sister, since she was the last living Elder, who had to die in order for the Source to fully materialize and the prophecy to be fulfilled.

Fiona found Charity and Harry in the Vortex Viribus and she killed her on sight. While in the forest, Alastor took Maggie hostage, forcing Mel and Macy to stand down. Fiona then ignited the Sacred Flame, intending to let Parker Caine take in the power and destroy him with it in order to destroy magic. Unfortunately, without her immortality, the spell killed her, though it still worked. She told Harry to heal her, but he outright refused and watched her disintegrate.

Described by Harry Greenwood to be as "passionate, talented, and stubborn" as Mel Vera, Fiona was introduced as a physically and mentally broken victim of the Elders, and had to be cared for by the Sarcana. She also seemed to be anguished over how she had let the Elders come between her and her sister, and even warned Maggie (who was, at that time, in Mel's body) to not make the same mistake with her own sisters.

However, after she regained her strength, Fiona revealed a dark side similar to that of Charity's: ruthless, manipulative, and single-minded. Despite Charity's surprise and joy upon seeing her again, Fiona showed her only utter contempt and distaste, going as far as to state that it was too late to reconstitute their own relationship. In fact, later on, she ultimately killed her sister and almost the entire Sarcana to ensure the Apocalypse would come to pass, and enslaved Harry to use his healing powers for her own advantage. She also had absolutely no qualms in cooperating with Alastor to raise the Source, for by then, Fiona was led completely by her intense and driving desire to destroy magic itself, as she felt it had ruined her life.

Fiona was a beautiful woman with long blond hair that reaches down to her back. Outwardly, she was very similar to her older sister. While she was still recovering but already conscious, she had a glowing turquoise rune on her forehead, though now it has gone.

"Don't make our same mistakes. Don't let anyone come in between you and your sisters. Especially not the Elders." — Fiona to Maggie in Switches & Stones. 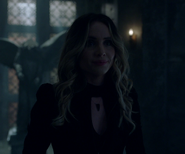 Retrieved from "https://charmed-reboot.fandom.com/wiki/Fiona_Callahan?oldid=44776"
Community content is available under CC-BY-SA unless otherwise noted.