Florence was a witch who cursed Lawrence Mortimer Chase and his entire male lineage before she died.

Florence was head of the Tulipe Institute in Seattle in the late 1800s. To the outside world, the place was an asylum for crazy women, but in truth it was a safe haven for witches. The institute housed twenty-five witches when Lawrence Mortimer Chase exposed them and had them all burned at the stake. Florence begged for his mercy, but he refused, angering Florence to curse his family before she died: twenty-five women were burned and so every male family member in the Chase line would be condemned to die at the age of twenty-five.

In "Past is Present", Maggie Vera stole Jordan Chase's sport wristband containing his sweat residue as required for a spell that would reveal what type of magic was present in him. It revealed that he was cursed by the dying breath of a witch. Later, after Harry Greenwood cloned Jordan's family ring and stole the original, Macy Vaughn performed a spell to reveal the most significant moment of the ring's history. It revealed that Lawrence Mortimer Chase, also known as the Witchfinder General and an ancestor of Jordan's, was cursed by Florence after sentencing her and her coven to death. The curse seemingly caused all the males in Chase's family to pass away before their 26th birthday.

In "Curse Words", it is revealed that Florence became a vengeful ghost who watched Lawrence Mortimer Chase's descendants die from her curse for 130 years. But on the eve of Jordan Chase's 26th birthday, Maggie Vera foresaw and prevented his death from a neon sign. Because of this, the angry Florence came to personally kill him. Eventually, Jordan decided to return her ring to her, and this act and the words of Maggie were able to calm her anger. She then left Swan's body and disappearing, she gave Maggie a hint for Jordan so that he could free his family from the curse. He must find "balance in justice."

In "The Enemy of My Frenemy", When Jordan drank an potion to make it appear like he was dead. Florence visited him and gives him an cryptic warning when he tells her he's doing all he can to balance the scales of justice.

In "An Inconvenient Truth", Florence materialized to Jordan again, this time by stepping through a mirror in broad daylight. Jordan tells her he is trying very hard to balance the scales. Florence then gives him an hourglass, telling him to help a descendant of the Tulipe witches who is now in danger. After giving him the hourglass, she disappears.

In "No Hablo Brujeria", Jordan finally balance the scales of justice when he protects Florence from Lawrence and disowns him as a ancestor since it was his actions who doomed the family. As Jordan vows to make the next generation of Chases better. Florence undoes her curse on Jordan and all future boys who will be born into his family.

Florence was once a good witch who wished only to protect her kind. After Lawrence Mortimer Chase burned her and her fellow witches, she became a vengeful spirit who targeted each and every male family member in the Chase family to enact the curse she put on them. After Maggie convinced her of Jordan Chase's goodness, she returned to her former self and told Maggie what Jordan needed to do in order to end the curse for good. 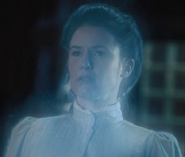 Retrieved from "https://charmed-reboot.fandom.com/wiki/Florence?oldid=47347"
Community content is available under CC-BY-SA unless otherwise noted.