Azura Skye
Helen McGantry (née Chambliss) was the first Whitelighter to be created by the Elders, making her the progenitor of all Whitelighters. As a mortal, she died in 1693 during the time of the Salem witch trials.

Helen Chambliss was married off to a man named Zachariah McGantry at the age of sixteen. Her husband was twenty-four years older than her. At some point, she met and fell in love with a man named Daniel Rayburn, who died in war at the age of thirty. Some years later, Helen became a Whitelighter and remained so for centuries. At some point, she lost her psyche and was confined to the Tulipe Institute along with her Darklighter, whom employees are led to believe is Helen's sister. The Elders paid the bills to keep them institutionalized.

In "Deconstructing Harry", Harry Greenwood went to the asylum to talk to Helen in hopes of finding out why the Elders had kept a hospital record of her. At first thinking she was a witch, Harry was attacked by Helen at the mention of the Elders. Though, he was able to reassure her and she healed him, revealing that she was really a Whitelighter. Harry soon found out that she was the first Whitelighter ever to be created, and in doing so created an evil version of herself in the process. 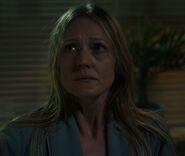 Retrieved from "https://charmed-reboot.fandom.com/wiki/Helen_McGantry?oldid=46096"
Community content is available under CC-BY-SA unless otherwise noted.