Hunter Caine[5] was the son of Alastor and the older, paternal half-brother of Parker Caine and Abigael Jameson-Caine. He was a shapeshifting demonic assassin tasked with collecting DNA from powerful witches, such as the Elders and the Charmed Ones.

He was vanquished by the combined efforts of the Charmed Ones on May 5, 2019,[6] as a part of his own father's plan to unleash the Harbinger of Hell (who inhabited Hunter's body) in order to raise The Source of All Evil.

Hunter was a member of the Caine Family.

An unknown number of years ago, Hunter was born to a powerful demon Alastor (known in the human world as Alistair Caine) and an unnamed demonic woman. It is not currently clear where Hunter's mother has gone or whether she is alive at the present time. However, he had been in contact with his dad for a long time and had carried out his assignments.

When the Charmed Ones were constituted, Hunter and his younger half-brother were assigned various roles to help in their father's mission to raise The Source of All Evil and take out the Vera-Vaughn sisters.

In Exorcise Your Demons, Hunter doesn't appear in person and his name is not voiced, but Parker tells Maggie Vera a story that as a kid he wanted to learn how to play the guitar as good as his brother.

In Other Women, Hunter was tasked with obtaining DNA samples from Elder witches. He targeted Niko Hamada to cover his tracks after stealing the DNA from her, leading Mel Vera to try to save her. The Charmed Ones use a spell to erase Niko from Mel's life in order to keep her safe from Hunter. At the end of the episode, he reports to Alistair about his failure, concluding that the Charmed Ones had succeeded and the memories about the person (Niko) which he was supposed to find had been erased. He also addresses to Alistair as "dad", revealing their kinship to the audience.

In Kappa Spirit, Hunter no longer remembers Niko was his target (due to the Charmed Ones rewriting history), but remains dedicated to his mission to obtain DNA from powerful witches. He kills Dr. Gregorian, when the chairman accidentally caught him stealing the DNA of Macy Vaughn.

In Bug a Boo, Hunter defends his brother from their father's harshness when Alistair is angry at Parker because he keeps failing all the missions assigned to him. Later, he takes the form of a waitress and visits Parker in a restaurant restroom and instructs him to find a way to run an errand of their father's.

In Jingle Hell, Hunter and his younger brother go to a church in Bucharest to find an amulet on their father's order. This amulet has the ability to absorb powers. Alistair wants them to obtain this amulet to steal the powers of the Charmed Ones. The brothers were able to steal the amulet, but a priest attempted to send the thieving brothers through a portal to Tartarus via his staff. The priest, however, ends up being killed by Hunter, despite telling Parker that we wouldn't kill him, and his staff is stolen as well.

On Christmas, the brothers plan to use the amulet with Parker giving it to Maggie as a present. The amulet slowly drains the Charmed Ones of their powers; however, Mel noticed as the amulet changed from white to black to notify of the complete drainage of their powers. Hunter knocks out Macy and ties her up, using his abilities to impersonate her. However, Parker has a change of heart and takes the necklace back from Maggie which gives the sisters back their powers, allowing Macy to free herself and call her Whitelighter Harry Greenwood for help. During the following battle, Hunter is able to take the form of both Harry and Maggie until Parker takes his shadow form to fight him and Mel fends him off by unwittingly calling upon the Sarcana's crows.

Later, Hunter returns to the Vera Manor, but ends up being imprisoned in Tartarus with the priest's staff after Parker turns on him. However, he drags Harry down the portal with him.

In Keep Calm and Harry On, Hunter doesn't appear physically, but within a week after the events of the spoiled Christmas, Parker kept deceiving their father about the real whereabouts of his half-brother. He told Alistair that Hunter had stolen the amulet and now doesn't want to be found.

Alistair doesn't believe Parker's obvious lie. When the father mesmerizes Parker's mother, Julia Wagner, and learns that Hunter was trapped in Tartarus, he shows shock and anger about it. He goes to Dante to try to free his son, even if it means finding himself in front of the Vera sisters. The rescue of Hunter failed and his father was forced to retreat and leave Hilltowne.

In Source Material, Hunter was broken out of Tartarus by Charity Callahan at the orders of his father and begins masquerading as his brother's mother. Knowing she's close to eradicating Parker's demon side, Hunter manipulates him to into thinking he lost control and killed his mother during the experiment. He then kills a gag and bound Julia after Parker runs off and puts her body in the truck of her car. Later, he takes the form of Maggie to ruin Parker and Maggie's relationship so that Parker will willingly go along with their father's schemes and absorb the Origin Dagger.

In Ambush, Hunter was tasked with going after all of the Elders. Using his shapeshifting power to his advantage, Hunter went after many Elders without blowing his cover. Wanting to defend themselves, the remaining Elders and the Charmed Ones organize a "wake for dead friends" to trap the culprit. However, Hunter was one step ahead and posed as one of the Elders to storm the place unsuspected. After killing another Elder, he showed his true face and, despite everyone's efforts, dispatched all but one Elder. Hunter then went to a party at the Haunt to lure the Charmed Ones. Once there, the Elder, Devorah Silver sent them all to a pocket dimension where they fought and vanquished Hunter. With his last breath, Hunter threw his dagger directly into Elder Silver's chest, killing the last sage on his list before vaporizing. Because he was carrying the Harbinger of Hell inside his body, the vanquish set Harbinger free and started infecting mortals to bring about the Apocalypse.

Hunter seems to have a sadistic and somewhat violent personality, showing disdain for humans and their emotions. He takes pleasure in desecrating Trip's grave and is completely remorseless in his attempts to murder Niko Hamada.

Despite that, he seems to have a certain commitment to duty. He has a high degree of loyalty to his father and has shown the ability to experience affection and concern for his half-brother Parker.

Hunter's human appearance is a tall, handsome white man who seems to be in his twenties. He has brown hair and matching eyes.

It is not known what Hunter looks like in his demonic form. However, he has bright eyes that sparkle with white light.[7]

Powers Granted by the Harbinger of Hell

While in Tartarus or shortly after his return, Hunter inhaled the Harbinger of Hell, which empowered him. In addition to increasing his extant powers to the point he could overpower numerous Elders at once, the Harbinger granted Hunter the following powers:

"Little brother, you will pay for this."

—Hunter hissed it to his brother when Parker tried to banish him to Tartarus in Jingle Hell.

"It's like taking candy from a baby. It's only a matter of time."

—Hunter speaks unflattering of Parker to Alastor in Source Material.

—Hunter calls the Charmed Ones on the phone in Ambush. 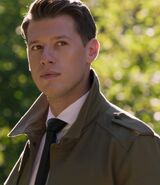 With his dad and his half-brother

Hunter and his dad

Retrieved from "https://charmed-reboot.fandom.com/wiki/Hunter_Caine?oldid=48494"
Community content is available under CC-BY-SA unless otherwise noted.