The Sisters of Arcana

Jada Shields is a Whitelighter-witch that made her entrance into the lives of the Charmed Ones by stealing the Scythe of Tartarus from them to release the witch, Fiona Callahan, from Tartarus. She was a member of the Sisters of Arcana (better known as the Sarcana), a coven of rebel witches who did not follow the rules of the Elders and used unsanctioned magic to protect both the mortal world and the world of the supernatural before they were betrayed and all massacred by Fiona, leaving Jada as the sole survivor.

She is also the ex-girlfriend of Charmed One, Mel Vera. The two of them began dating shortly after Mel joined the Sarcana, and broke up when Mel began to rethink things.

Jada was born to an unnamed witch and Whitelighter. It is presumed that she was given up at birth, due to being the product of a forbidden relationship, and was adopted by a human couple. At some point, after coming into her powers, she ran away from home and eventually joined the Sarcana.

Jada was first seen flirting with Mel Vera at The Haunt but she left the bar before Mel could learn anything about her identity. She would later appear at the Vera Manor and reveal herself to have powers, using them to steal the Scythe and to escape.

The Charmed Ones began to hunt her after that, hoping to retrieve the Scythe from her, but she was able to stay one step in front of them the entire time. After escaping from the trio again one night, Jada used a spell to release "one of the greatest witches known in recent history" from Tartarus, an act that separated the Scythe into three pieces again.

After releasing the mysterious witch from her prison, Jada started to recruit Mel into the Sarcana, hoping a Charmed One could join their ranks. She tested her reflexes and powers by attacking her, and then explained to Mel what the Sarcana is and why she opposed the Elders. She also revealed that she was allies with Marisol Vera, even creating a spell with her that was placed within the book.

She and Mel eventually begin a relationship and go on Sarcana missions. Though, when Harry Greenwood is stripped of his powers, Mel comes to ask Jada for Sarcana help in which Jada basically blows her off, prompting Mel to rethink everything about the Sarcana and end things with Jada.

After helping to bring Fiona Callahan to full health and power, Fiona turned on the Sarcana, stating that they were just like the Elders and only wanted to control magic. She decimated the coven, leaving only Jada as the surviving member - though Fiona likely thought that she had killed her. After being found by Mel, Jada warned her that Fiona is the only witch that might be able to challenge the power of the Charmed Ones before she left in an orb.

Jada is described as independent and fierce. She also seems very dangerous given her entrance into the Charmed One's lives; however, she also appears to bear some charisma, as seen when Mel was obviously very taken with her on their first encounter; and Maggie (in Mel's body) was instantly endeared to Jada after she was kissed by the latter.

Jade is a woman with olive skin, green eyes and black hair in plaits. She has a lip piercing. She appears to favor black clothing, as do the rest of her coven. Her shirts have a pentagram design halter top.

"I think I survived her power surge because I'm half Whitelighter, I...."

— Jada to Mel in The Replacement. 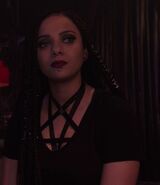 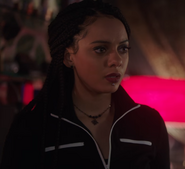 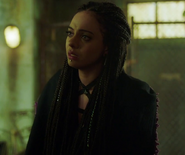 Retrieved from "https://charmed-reboot.fandom.com/wiki/Jada_Shields?oldid=47759"
Community content is available under CC-BY-SA unless otherwise noted.