HAPPY HOLIDAYS — Mel (Melonie Diaz) turns to Harry (Rupert Evans) for guidance after learning information about the magical world; Macy (Madeleine Mantock) is determined to not let fate get in the way of her and Galvin's (Ser'Darius Blain) potential relationship. Maggie (Sarah Jeffery) tries to keep her mom's Christmas traditions going and is excited for Parker (Nick Hargrove) to be a part of it.[1]

We start the episode with Mel joining the Sisters of the Arcana. Jada warns Mel about the Elders and about joining their group, will not go well with the Elders.

It is Christmas time in the Vera household. The Charmed ones are celebrating their first christmas together. While Maggie is thrilled their dad will be with them during their first Christmas without their mom, Mel warns her sister for being too trusting and to be prepared he might not come. Mel’s initiation into the Sisters of the Arcana is looming and despite warnings from Harry and Maggie, she’s so keen on carrying out the mission, especially if the rogue witch collective are truly behind the murders of their mother and the other elders.

Meanwhile, we find Hunter and Parker breaking into a church in search of the Amulet of the Archangels, which they need to drain the Charmed Ones of their powers. But as they attempt to capture it from a tombed in the center of the church, they’re interrupted by a priest holding a magical staff, chanting a spell to open what appears to be a portal to hell. Hunter is able to overpower the priest and while Parker convinces his brother to spare the priest, Hunter waits until he’s gone to kill the priest and steal the staff.

Galvin, survived being hit by a car and only has a broken leg, when he surprises Macy with a visit on his way out of town. He comes bearing mistletoe, and as he goes in to kiss Macy, he loses his footing and topples over in the middle of the foyer.

In the lab, Dr. Wagner, Macy’s boss, is revealed to be Parker’s mother and she is the one who is going to be creating his magical serum. While he knows the serum will save him, it will also turn him into a full demon and Parker is conflicted about it, not to mention the fact that he really likes Maggie. His mother pushes him to follow his father’s orders and give Maggie the amulet if it means saving his life, which is all she cares about.

Meanwhile, Alistair and Hunter celebrate being one step closer to completing their plans, which which will not only see Parker turn into a full demon when he takes the serum, but it seems he’ll also become the Source of All Evil.

Galvin is no longer going out of town for the holidays, instead spending it on the Vera sofa. Macy is, once again, under the impression that the Yoruba protection spell is working to prevent them from being together. She recruits Harry to keep Galvin company, supplying Galvin with endless drinks.

Parker also turns up at the Vera manor, with presents. Following the Vera tradition, Maggie moves to put the presents under the tree until midnight but Parker convinces her to open his gift, which is an amulet, which he tells her came from some vintage shop. Maggie loves it and puts it on.

Meanwhile, Mel endures the Sarcana initiation, which consists of her getting the Sarcana’s symbol tattooed on her wrist. However, following her initiation, a murder of crows fly overhead, prompting Mel to remember the crows flying out of her house the night her mother was killed.

Back at the Vera Manor later, Mel reports back to Harry, now certain Jada and the Sarcana were involved in Marisol’s death. When Macy sees Harry is debriefing with Mel and not keeping Galvin company, she sends him away to get Galvin more coquito. However, Galvin seems to be having an good time chatting with Parker and Maggie now. But as the guys both shake hands, Parker falls over in pain as Galvin’s mark glows especially bright. Shocked, Macy takes Mel into their snowy backyard to tell her what she just saw and wonders whether it means Parker could be bad news for them.

Macy calls Mama Roz for confirmation but before she can do anything, Macy is knocked out by Hunter. Now tied up in the shed, Hunter shapeshifts into Macy.

As Maggie and Parker put together something for Christmas, Maggie can’t help but point out how terrible Parker is sounding. When she asks about his ongoing treatment, he tells her in on a new medicine that could cure him but has serious side effects, which is a very sugar-coated way of saying he’ll be a demon. Mel sees Maggie’s new amulet change colors, a sign their powers are draining, and pulls her aside to ask about it.

When Mel mentions the protection spell incident earlier, Maggie gets defensive and upon receiving confirmation that their father is, in fact, bailing on them, she gets upset and runs upstairs, followed by Parker.

Maggie confides in Parker that she’s worried Mel’s right in that she’s too trusting. She asks Parker about the necklace and why it changes color, which he deflects by agreeing with her suggestion that it’s a mood necklace. Maggie asks Parker if she can trust him, adding that she doesn’t know what she’ll do if he lets her down too. Parker’s human side is feeling conflicted as he gently slides the amulet off Maggie, and slips it into his pocket without having succeeded in draining her powers, something Mel sees from the doorway.

Deducing that the amulet is no ordinary mood necklace, Mel confides in Hunter (as Macy), who confronts Parker in the bathroom. Now taking his own form, Hunter chides Parker for letting his human side get the better of him. He also tells Parker that it is his destiny as the Source of All Evil and convinces him to put the amulet back on Maggie. Unfortunately, the pair are interrupted by Galvin, whose needs some assistance getting to the bathroom.

In the attic, Mel and Harry are searching about the amulet in the Book of Shadows and learn Parker is using it to try to steal their powers. The pair are joined by Hunter (as Macy), but in the shed, Macy has managed to loosen her gag and calls out to Harry. His cover blown, Hunter (as Macy) kicks Harry through the attic window and is ready to kill him when the whitelighter is able to get away when the real Macy calls out for him again.

The drama forces Maggie into the backyard, where she finds Hunter now taking the form of Harry, but with an all-around terrible impersonation. Mel is quickly knocked out by Hunter (as Harry) using her own magic against her but not before she warns Maggie that she’s standing next to a shapeshifter. Parker asks his brother to put an end to his mess, as Maggie looks on, confused as to why he seems to know what’s going on.

But as Harry and Macy join the massive confrontation, Hunter shapeshifts into Maggie and the two Maggies stand next to one another, each claiming they’re the real Maggie. Macy and Harry attempt to intervene but are knocked out by Hunter (as Maggie).

Finally, Parker turns into the Shadow Demon and forces Hunter to show himself. The brothers fight and the weakened Parker goes down quickly. Luckily, Mel regains consciousness in time and uses her powers to hold Hunter back. As a new Sister of the Arcana, she’s able to summon the crows and they attack the demon until he disappears.

Parker brings her to a Christmas decorated gazebo somewhere in town. He tells her how terrible he feels about everything. To make it up to her, he crushes the amulet and tells her the truth, about his being half-demon/half-human and the real reason he gave her the amulet. Maggie is heartbroken, believing their entire relationship to be based on a lie.

Maggie returns home devastated and Maggie vows to never be so trusting again to her sisters and Harry. In the kitchen, Jada arrives to check on Mel, aware she’s already called upon the crows to help her. She then reveals something Mel already knows: the crows were at their house the night Marisol died. Jada says that the crows tried to help her but failed, and while the Sarcana don’t know who did it kill Marisol, they want to help Mel find out who did kill her.

With Galvin asleep in the den, having missed all the commotion, The sisters and Harry are gathered in the living room, about to open up presents when Hunter reappears. However Parker also appears, Looking to take his brother down once and for all. Parker is wielding the staff that Hunter stole from the priest in Bucharest. Like the priest did in the beginning of the episode, he begins chanting a spell, which Harry reveals is opening the portal to Tartarus.

As Parker’s health issues have left him pretty weak, the Charmed Ones take over the spell and succeed in opening the portal up. However as Hunter falls through the portal, he has taken Harry down with him. And to make matters worse, Galvin so happens to suddenly show up seeing the whole thing.

Alistair Caine (to Hunter): "Aw, don't be jealous. You get to be the fun one."

Maggie: "Harry, are you okay? What happened?"

Hunter (as Harry): "Blimey, that strumpet nearly made me soil my knickers."

Maggie: "Why do you suddenly sound even more British than usual?" 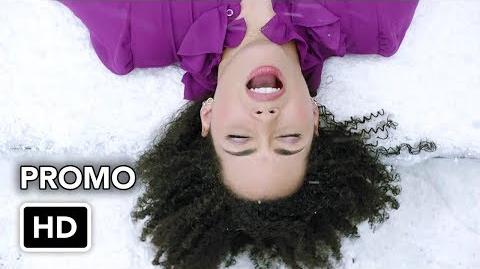 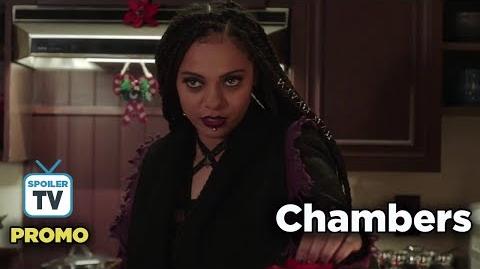 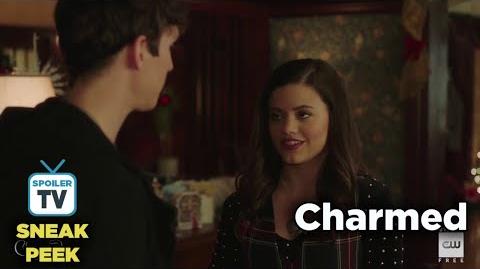 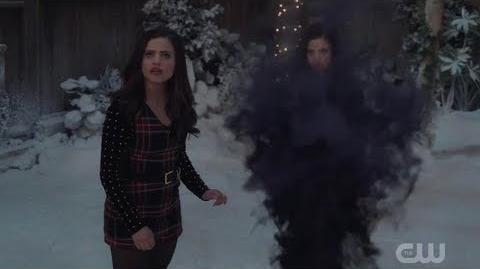 Retrieved from "https://charmed-reboot.fandom.com/wiki/Jingle_Hell?oldid=38355"
Community content is available under CC-BY-SA unless otherwise noted.