Jordan Chase is a boxing instructor at the gym in SafeSpace, Seattle. He is the boyfriend of Lola. Jordan befriended Maggie Vera after her and her sisters were forcibly moved to Seattle.

The entire male line of his family was cursed to die at the age of 25, because of the elimination of one of the covens of witches at the hands of one of Jordan's ancestors, Lawrence Mortimer Chase. Jordan is the only male in his family to have survived in over one hundred and thirty years, and eventually broke the curse.

Jordan's father died from a brain aneurysm when Jordan was 4 years old. He grew up with his mother and grandmother. Knowing that his grandfather, father and uncle all died before their twenty-sixth birthdays, Jordan decided to live his life to the fullest as much as possible. Jordan took an interest in boxing at a young age, so he took lessons. He enlisted in the military as a medic for five years before finding out that his grandmother was sick and needed him to help out. Since then, Jordan has rented a gym at SafeSpace, Seattle to train in boxing while taking night lessons to become a lawyer.

In "Safe Space", Jordan was training one of his students when Maggie Vera came into the gym in search of a first aid kit. He began to help Maggie by offering up the kit but took it back as he began to question parts of her story and why she needed it. He offered up his skills as a medic to help but after getting shut down by Maggie, he finally gave into her plea, telling her how he does not trust easily while giving up the first aid kit.

In "Things to Do in Seattle When You're Dead", TBA

In "Careful What You Witch For", Jordan applied for the assistant manager position for a bit of extra money to keep the gym at SafeSpace, Seattle from being shut down since the rent went up. Maggie learned that Jordan had an impressive resume and was friends with the manager which made her feel insecure. However, Maggie later used magic to get the job. Unfortunately, this means that the gym will have to close.

In "Deconstructing Harry", Maggie had her first vision of Jordan saying "I love you." She is, at first, taken aback by this, until it is later revealed that her vision was of Jordan thanking and telling his girlfriend Lola that he loved her when she returned his car keys. Maggie felt uneasy about her behavior and hurried away.
Later, she apologizes to him for her awkward behavior. But when Jordan goes to his girlfriend, Maggie looks upset. Her sister Mel Vera notices and asks her what she felt. Maggie tries to change the subject to her powers, but Mel slyly notices that this is not what she was talking about. Maggie is confused and decides to leave her sister's question unanswered.

In "When Sparks Fly", Maggie tried in every way to touch Jordan in order to get a vision of where her sister Macy Vaughn might be, which caused him embarrassment. After their karaoke duet, Maggie came up with an excuse to stay with Jordan in the elevator, which displeased his girlfriend.
Mel Vera de-energized SafeSpace, which caused Jordan and Maggie to be stuck together for a while. Jordan and Maggie talked in the elevator and he told her a little about his family and their family ring. Maggie quickly realized that it was the ring that gave her a visions. While holding Jordan's ring, she began to have a vision that would help find her sister Macy Vaughn.
Later, Maggie asked him to let her try on the ring. When Maggie put on his ring, she saw a new vision of the future involving Jordan being in danger or getting hurt. This vision frightened her very much and, when the elevator started working, Maggie gave up the ring and runs away, leaving Jordan bewildered by what had happened.

In "Past is Present", it revealed that Jordan's ancestor, also known as the Witchfinder General, was cursed by the dying breath of a witch after sentencing her to death. The curse seemingly caused all the males in Chase's family to pass away before their 26th birthday. Jordan did not know that he was in mortal danger, and the Charmed Ones and Harry began to think about how to save him and not reveal the existence of magic.

In "The Rules of Engagement", Maggie saw an extended version of her vision and realized that her distraught ex-fiance Parker Caine, who would come to kill Jordan. Knowing that this could ruin her relationship with Parker forever, she decided to save Jordan anyway.
Jordan was angry when he saw that Parker was abusing Maggie. He tried to protect her from Parker, but he, having a demonic advantage, threw Jordan into the wall, causing him to lose consciousness and possibly get a concussion. Later, Maggie managed to save Jordan.

In "Guess Who's Coming to SafeSpace Seattle", TBA

In "Curse Words", during Jordan's 26th birthday party, Maggie had a vision of a neon sign falling on top of Jordan and killing him. Maggie was able to prevent this from happening by tackling Jordan and knocking him out of the way just before the sign fell. After the party was over, Jordan told her that all his male relatives dead before the age of 26.
Soon after, the vengeful ghost of Florence possesses Swan, and uses her to kill Jordan herself as Maggie had thwarted the curse long enough. This deadly circumstance causing Maggie to reveal the door to the Command Center and escape with Jordan inside. So he found out Maggie and her sisters are witches.
Eventually, Jordan decided to return the ring that had been stolen from Florence by his ancestor Lawrence so long ago, and this act and the words of Maggie were able to calm her anger. Before Florence moved on to the afterlife, she gave Maggie a hint for Jordan so that he could free his family from the curse.
Later, Maggie answers Jordan's questions about witches and there is a romantic awkwardness between them when he asks her if witches and mortals can be in love with each other. Despite her pessimistic response (coming from Maggie's experience about the relationship of her parents), Jordan apparently does not despair, but he decides to postpone their conversation and take the exhausted Swan to her home.

In "Needs to Know", Jordan does not physically appear. Though, he is shown to text Maggie asking her to join him for karaoke. He is later shown to be texting Maggie again.

In "Sudden Death", Jordan appeared in front of Maggie and noticed that she was avoiding him after them after they had "a moment". She is embarrassed, and he takes the conversation in a different direction, saying that he is ready to help her with anything.
Later, they come to Abigael Jameson-Caine together, and while Jordan distracts her by talking about his family curse, Maggie sneaks into the dungeon in search of the ritual dagger.
Left alone with her, Jordan was subjected to open sexual harassment from Abigael and he was shocked by this fact. She also interested him in information that perhaps she could help him break the curse if she gave him a list of witches who needed help. However, before Jordan could learn more about these witches, Abigael declassified him that he and Maggie had come here to steal her dagger and free her brother. Jordan is shocked that Parker is alive, much to the surprise of Abigael.
Jordan and Abigael appear together in the dungeon and she takes the dagger from Maggie. Jordan and Maggie try to protect each other, which makes Abigael laugh and Parker upset. Abigael is also angry that Maggie tried to free her ex by hiding behind her "new boyfriend", but the Charmed One convinced her that she only came here for the dagger because Maggie and her sisters believe that they can't regain the Power of Three because Abigael did something to Macy's powers. When Abigael hears this, she is even more amused and calmly gives Maggie the dagger, saying that she can do any checks, but Abigael didn't do anything with the Power of Three, and that Maggie and Jordan should leave when they finish their checks. Reluctantly, Parker asks him to take care of Maggie, to which Jordan replies that she is able to take care of herself.
Later, Maggie apologizes to Jordan for not saying that Parker is alive, because it was hard for her to accept this fact and these circumstances caused her "trauma". Jordan treats her with understanding and says that all he cares about is making sure that everything is okay with her and that he doesn't hesitate to risk everything to help Maggie and her sisters. Jordan's support makes her smile and brings relief.

In "Third Time's the Charm", Jordan's manifestation appears in Maggie's dream. He doesn't take her seriously because he sees Maggie as a little girl. However, later he gets tired of playing with her and he throws her. This event reflected Maggie's two great fear that she would not be perceived as an adult woman and that one day she might lose Jordan.

In "Don't Look Back in Anger", he finds Maggie having a panic attack and catches her before she faints. Later, Jordan calls Macy trying to reach Maggie, who has gone out of town on a mission.

In "An Inconvenient Truth", TBA

In "Someone's Going to Die", TBA

In "You Can't Touch This", TBA

Jordan is cautious and doesn't trust people easily, as evidenced during his first encounter with Maggie where he believes Maggie is lying to him about an injured sister.

Jordan is six feet tall with olive-toned skin and curly black hair inherited from his African-American family. His physique is lean but muscular, and he keeps his mustache intact. 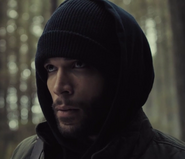 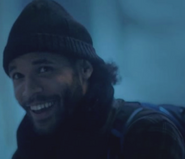 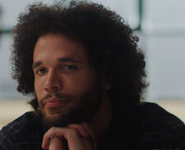 Retrieved from "https://charmed-reboot.fandom.com/wiki/Jordan_Chase?oldid=48457"
Community content is available under CC-BY-SA unless otherwise noted.