Head of the Department of Genetics

Dr. Julia Wagner was the ex-wife of the demon Alastor and the mother of Parker Caine. She became the lab manager of Hilltowne University's Department of Genetics after the death of Dr. Gregorian. Julia would later be killed by Hunter Caine, her ex-stepson, as part of Alastor's plan for Parker to take on The Source of All Evil.

More than 20 years ago, Julia met an ancient demon Alastor and married him. It is likely Alastor wanted a half human son as part of the plan to raise The Source of All Evil. Through Alastor, she gave birth to her only son, Parker Caine. Eventually, Julia and Alastor divorced, but continued to maintain a working relationship. At some point, Julia discovered that her son was dying of a supernatural disease and began to look hard for ways to cure him.

Julia promoted Macy Vaughn to supervise the lab and wanted her to fire Galvin Burdette. Macy told her her decision to keep Galvin the next day, but agreed to help her save her budget by doing indoors experiments and firing Kretz.

Julia is revealed to be Parker’s mother and she is the one who is going to be creating his magical serum. While he knows the serum will save him, it will also turn him into a full demon and Parker is conflicted about it, not to mention the fact that he really likes Maggie. His mother pushes him to follow his father’s orders and give Maggie the amulet if it means saving his life, which is all she cares about.

Within a week after the events of spoiled Christmas, Parker kept deceiving his father about the real whereabouts of his brother (he said that Hunter had stolen the amulet and now doesn't want to be found). Alastor doesn't believe this obvious lie and doesn't care about the deteriorating state of Parker continues to ask him where Hunter actually. Julia helps Parker hide from his father that Hunter is in Tartarus. However Alastor suspects something is wrong and uses mind control to force Julia into telling him the truth after he getting it. He erases her memory of their interaction.

Julia managed to successfully suppress Parker's powers, but unfortunately an pixie named Chloe targets him which has to make Maggie reverse the effects of Julia's work.

Thinking her demon instincts are kicking in, Macy suggests she talk to Dr. Wagner at the lab, but Charity immediately shuts the idea down. At the lab, Dr. Wagner reveals to Parker that her serum prototype to combat the demon cells seems to be working and he’s getting better. He and Maggie celebrate the good news over brunch but are quickly interrupted by Lucy who poisons under Alastor's mind control. Maggie and Mel take their concerns about Macy to Dr. Wagner but can’t provide enough information for her to diagnose Macy’s behavior as demonic, but when they mention Macy’s burn bruises and that Charity told them self-harm is a demonic trait, Dr. Wagner scoffs. Noting her extensive personal history with demons, she’s never heard of it. Using a still from Maggie’s Kappa video college, Julia looks at the burns, saying she’d need to see them in person to make a formal diagnosis. However Harry healed them at Charity’s urging, so they’re no longer there. During the conversation, it hits Mel that there’s something very dubious going on and that Charity is at the center of it.

Maggie is desperate to see Parker but his condition is too dangerous. Julia reveals that the last time Parker was afflicted with this demonic virus, the blood transfusion from Alastair activated his demon side. She also opens up to Maggie about meeting Alastair, not knowing he was a demon until she was living a “real-life Rosemary’s Baby.” While Parker refuses a blood transfusion from Alastair, Julia needs demon blood to cure him and since Macy, a half-demon, is ineligible, Maggie vows to find some. After securing it Maggie gives the demon blood to Dr. Julia, who warns her that things are going to get worse before they get better. As Dr. Wagner goes to deliver the dose to Parker, we find out why she’s keeping Maggie away. No longer in his human form Parker now looks wildly unhuman — in his uncontrollable, shadowy demon form. This makes her more determined to eradicate her son's demon side.

Hunter masquerades as her using his shapeshifting abilities knowing she's close to eradicating Parker's demon side. Thinking he has killed his mother after an unsuccessful experiment Parker flees Julia's lab in terror. Hunter kills Julia once his brother is gone and places Julia's body in the truck of her car which is where Macy and Gavin find it. Harry takes Julia's body to her house and stages the death as heart attack.

For unknown reasons, she hates her ex-husband and ex-stepson (perhaps because of their demonic nature). But at the same time she loves her son enough to let him become a full demon, if it will save him from death because of his illness.

Julia is a white woman in her forties or fifties with long brown hair and dark gray eyes.

"Dr. Vaughn. This is business. It's not personal." — Julia to Macy after the offer to dismiss Galvin in Out of Scythe. 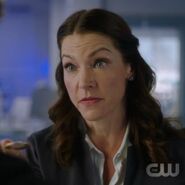 Retrieved from "https://charmed-reboot.fandom.com/wiki/Julia_Wagner?oldid=46793"
Community content is available under CC-BY-SA unless otherwise noted.