INNER STRENGTH — The sisters turn to the Elders for advice about Harry (Rupert Evans). Mel (Melonie Diaz), fed up with the Elders rules, turns to Jada (guest star Aleyse Shannon) for help without telling her sisters. With a plan in place, they must face an unexpected threat which leads Maggie (Sarah Jeffery) to find a strength she didn't know she had. Meanwhile, Galvin (Ser'Darius Blain) shares some shocking news with Macy (Madeleine Mantock) that will change everything. Nick Hargrove also stars.

The episode begins, in 1950s England, as we see a masked thief fleeing a bank he has just robbed. He doesn’t get too far before being caught by the police as we learn it is Harry Greenwood.

In the present day, trapped in the fiery depths of Tartarus, Harry is being tortured using his darkest memories, memories he never knew because all of Harry's memories from his life as a human were removed once he became a Whitelighter. Although a leering dragon claims, Harry believes these to be false memories. But the dragon makes it very clear to Harry, this is only the beginning of his torture.

In Hilltowne, Mel and Macy are still trying to look for ways to free Harry and it has been at least a few weeks passed, with help from Charity. We learn that Mel destroyed the Scythe of Tartarus and the Elders are not interested in saving Harry, but Charity at least is willing to try.

Meanwhile, Maggie is still dealing with the fallout from the revelation that Parker is a demon or at least half-demon. She feels very betrayed by Parker, and also feels like her powers betrayed her by not revealing Parker’s secret to her. Tired of all the pain she feels, Maggie decides to use the Book of Shadows for a spell that’ll take her pain away.

At the Hilltowne lab, Parker is looking pretty sick and his mother is doing everything she can to help him without the Charmed Ones powers as Parker insists he made the right decision in not using the amulet. Alistair Caine interrupts the two, asking as to where Hunter is. Parker lies to his father that he banished Hunter to Tartarus.

At the lair of the Sarcana, the sisters are attempting to heal the sister that was rescued from Tartarus but lack the firepower they need to cure her completely. Mel tells Jada her concern about Harry and the lack of help from the Elders. Jada, however, is willing to help, giving Mel the name of a guard to Tartarus the Charmed Ones may be able to con into getting Harry free.

Meanwhile, in Tartarus, Harry is tortured by more memories of his past, this time he sees himself getting stabbed in the stomach after a fight in prison. The memory leaves Harry in pain as he lifts up his shirt to reveal a scar where the knife would have been.

Galvin meanwhile, is taking all the knowledge he now knows about Macy and her sisters well. Galvin even is able to help Macy out in her lab by searching for the information Macy needs the two search around Julia’s office, and stumble across a DNA sequence that indicates Julia is looking at ways to turn human DNA into demon DNA. However, Julia makes an unexpected return to the lab and the two cover their tracks by pretending to be caught kissing in her office. Galvin invites Macy over to his place, in turn, Macy rejects and says she is still a virgin.

Maggie has a run in with Parker on campus at Hilltowne University, and it causes Maggie more pain, that she uses the anti-heartbreak spell in the Book of Shadows again. However, it backfires in a bad way.

Looking for a way to bribe Dante, the Tartarus guard, into freeing Harry. Mel decides it’s time for the sisters to use the only real thing he'd want and that is swap the Harbinger of Hell for Harry. Mel tells this idea to Charity, who initially dismisses it, until Mel convinces her about her feelings for Harry, which eventually wins her over and she gives them the paint can, however, none of them know their paint can containing the Harbinger of Hell is actually sitting securely in Alistair Caine’s office.

The sisters seek out Dante. Dante gives the sisters a glimpse at Harry before they’re able to make the exchange, Dante discovers the Harbinger of Hell isn’t in the paint can and believes the sisters tried to trick him. As he makes a move against them, the sisters devise a plan to incapacitate the Tartarus guard and use his thoughts to figure out how to rescue Harry. But Maggie’s powers aren’t working due to her anti-heartbreak spell and Dante is able to break free and now Maggie is sent to Tartarus.

Mel and Macy rush to Charity for help, they argue, and then learn that Alistair took it. Mel and Maggie have no choice but to ask Parker for help.

When they visit Parker in his dorm, he feels very guilty about the events last year at Christmas and is looking for a way to help Maggie. He offers to assist Mel and Macy in their efforts to steal the Harbinger of hell from Alistair’s office.

Back in Tartarus, Maggie is being tortured with her own memories of Parker and her mother's death. Maggie calls out for Harry, whose fiery oubliette is close to hers. Harry gives Maggie some much-needed words of encouragement about using love as her strength against the torture. Harry begs the dragon to let him suffer more and leave Maggie alone. The dragon agrees and Harry’s next memory is the worst one yet, finding out he had a son who died.

Parker helps sneak Macy and Mel into Alastair’s office, where they’re able to steal the real can containing the Harbinger of Hell. Before they depart, Mel spots and secretly takes a bottle of firepower. Back at the lab, Alistair is very certain Parker is lying about Hunter’s fate. He confronts Julia in the lab and gets her into revealing that Hunter is in Tartarus.

Macy and Mel return to Dante with the real paint can. But just as Maggie and a very worse for wear Harry are taking their first steps to freedom, Alastair arrives. The sisters and Alistair meet for the first time. Alistair was looking for his son, Hunter.

Alistair introduces himself as Alastor "The Dark Master", and Macy uses her powers to silence him with a knife, stabbing him in the forehead doesn’t do any real damage to him at all and allows him to reveal his true demonic form. Maggie is very frustrated that she doesn’t have powers that’ll help her fight back, but reading Harry’s thoughts reminds her of the speech he gave her in Tartarus and she has an idea.

The sisters use the Power of Three to create a powerful force field to fend off Alastor and cause him to teleport away. With Alastor gone at least for now, Mel finishes the trade and sends the Harbinger vessel into Tartarus. As the sisters try to understand what Maggie did, Harry reveals that she created a spell, indicating we may not have seen all of Maggie’s powers just yet.

Back at the Vera manor, Maggie tells her sisters she can’t believe she tried to take away her feelings with a spell and needs to deal with it. But sadly, now she can’t stop thinking about Parker.

Charity arrives at the manor to see Harry but is first confronted by Mel, who is feeling very mistrusted towards the Elders about their decision to leave Harry in Tartarus. But while they have no real interest in any lectures the Elders may have for them now, the sisters allow Charity to check in on Harry, especially because she cares about him, and he does for her.

In the living room, Charity comes to see Harry, and the two have a heart to heart about the torture Harry endured while in Tartarus. Harry tells Charity that in the memories revealed to him, he was a criminal who caused the death of his son, and that is so painful. Charity tells Harry that she was very upset during his imprisonment that she violated Elder rules and reviewed the memories that were taken from him when he became a Whitelighter so she could see what would be used to torture him in Tartarus. She reveals that everything he did was for his son, who is still very much alive. She then reveals her love for him and two share a kiss.

Parker soon arrives at the manor to check in on Maggie, who tells was under the impression he double-crossed her sisters and is still very betrayed. Before Parker leaves, he tells her that whatever happened between the sisters and Alastor spooked him so much it caused him to leave town, so he will not be a problem for them for a while.

Despite having infiltrated the Sarcana for the Elders, Mel’s loyalty towards the Elders has now slowly started to fade, finding herself genuinely drawn to the Sarcana now. She meets up with Jada at The Haunt, handing over the bottle of firepower she took from Alastor’s office. The two share their first kiss but someone is watching them from afar with a camera snapping away, and it is revealed to be Niko...

Galvin arrives at the manor where he and Macy clear the air, but Galvin didn't come because of Macy's virginity or other secrets she shared to him. While she and Mel were working to free Harry and Maggie, Galvin was sifting through the files the pair retrieved from Julia’s office and stumbled across the sisters’ DNA and with it, a shocking and huge revelation: Mel and Maggie don’t share the same father but Macy and Maggie do. Meaning that Mel is really the half-sister, not Macy.

Alastor: "Oh, hey Mags, how's it going, sorry to hear about the breakup."
Maggie: "Can we kill him now?"
Alastor: "I'd like to see you try, empath. Do you know what they say about a witch with passive powers? Nothing."

Parker: "Yes, my dad is the demon Alastor, also known as the Dark Master."
Mel: "Also known as the dick who stole the harbinger. I get it, the demonic apple doesn't fall far from the tree." 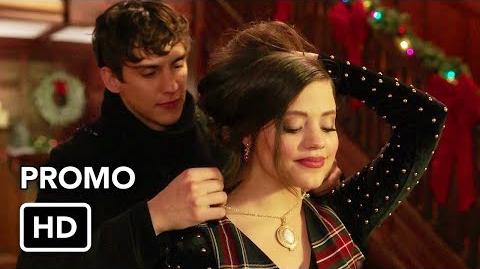 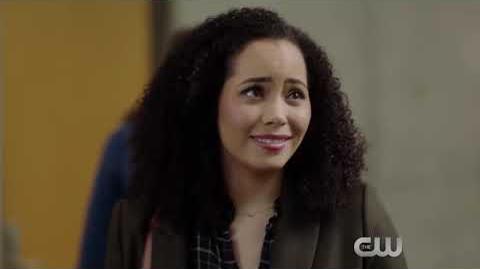 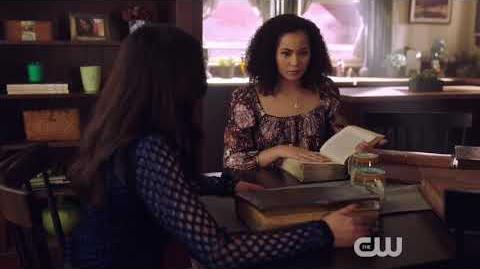 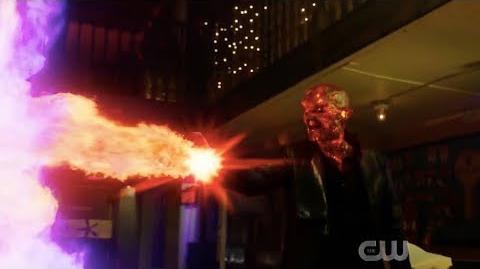 Retrieved from "https://charmed-reboot.fandom.com/wiki/Keep_Calm_and_Harry_On?oldid=38356"
Community content is available under CC-BY-SA unless otherwise noted.