Let This Mother Out

Let This Mother Out

SEEN AND HEARD — After getting a message from the spirit board to not trust Harry (Rupert Evans), the sisters are conflicted and ultimately concoct a plan to see if he is telling the truth. Desperate to believe the person warning them is trying to protect them, they end up going against their better judgment. Harry soon realizes that the sisters are up to no good and tries to help before it is too late.

Meanwhile; this new sisterly unit is not fully unified, with Mel (Melonie Diaz) and Macy (Madeleine Mantock) struggling with who is the real big sister and Maggie (Sarah Jeffery) caught in the middle.

In the lab at Hilltowne University, a janitor is busy cleaning when she is suddenly attacked by a very strange black blob, but it soon retreats into the vents.

Back at Vera Manor, Harry wants to know why they are acting so peculiar around him after they called him and reminds them that the Underworld now knows they are the Charmed Ones and they must call him immediately if there is a sudden change in temperature, rabid dogs or spontaneous human combustion. He tells them to stay away from spirit boards as they are great for tricksters. When he teleports out, the sisters decide to need to figure out who they can trust.

Maggie is trying to make Macy feel more comfortable living with her and Mel with moving into their mom’s room. She has one request and asks that she keeps the gift that she made her mom in the third grade, having no idea that it was a bong. Maggie feels so jealous that both sisters’ powers are coolers than hers. Mel feels Harry doesn’t want them using the board because he doesn’t want them to know the truth about him.

Suddenly the Book of Shadows opens to the page on truth serum and majority rules with Macy, where they should use the truth serum first before using the board again until they figure out if they can trust Harry. They talk about naming Harry by something else, so he won’t appear every time they say his name, but they go against calling him “Meghan Markle”, considering he is British after all. Maggie tells Mel and Macy they can work on the spell since she is off to Kappa, and decides to put on gloves to prevent herself from reading what everyone else is thinking.

At the local hospital, Lucy tells Maggie she needs to hold Angela’s hand, who is in the bed. She can hear everyone’s thoughts and when she does, all she can hear is Angela scream.

At Hilltowne University, Macy thanks Galvin for encouraging her to talk to her sisters again. Galvin tells her they are now partners, but finds it weird that Professor resigned the day after he was cleared of any crimes, Macy just says he was dealing with some personal demons. When they both see all the shattered glass in the lab, Galvin informs her that a woman from the cleaning crew lost her mind saying a black blob choked her and then escaped through an air vent. Macy sees the marks on the vent and takes an empty sample bottle out for research.

Maggie finds Brian and tries to just have sex with him, reminding him that they are just friends though, but she cannot resist herself from reading his thoughts. He tries to divert his thoughts but at the end, he says he loves her so much he has to win her back.

Mel is on the phone with her girlfriend, Detective Niko Hamada suggesting they get together for a lunch date. After Mel hang-ups the phone, suddenly the spirit board says, “MELLY” and she freaks out. Macy finds Harry at the hospital, who is wiping out the janitor’s memory of the demon attack.

Back at home, Mel is convinced she is talking to their mother when Maggie walks in as she is asking her questions only their mom would know answers too. Maggie tears up and Macy comes in demanding to know what is going on. Mel asks if their mother is there and the board grabs hold of Maggie. Macy then throws the board across the room, breaking it, telling them both about the demon attack and has a sample from the lab she did. Macy also has the truth serum, but Mel feels that Macy doesn’t want the spirit to truly be their mother. Macy admits that this whole sisterhood thing is really the two of them, with her feeling like an outsider.

The sisters are then interrupted by Niko who has arrived with lunch and they quickly hide the Book of Shadows. Galvin calls Macy who did her job for her and informs her that the janitor who freaked out the other day has now died; just then Harry arrives with tea for both of them.

Niko is in interrogation and it’s clear she took the truth serum while telling a perp and his lawyer that they have no case. Niko then calls Mel, revealing she loves her very deeply and she is a terrible driver. Mel suddenly realizes that she took the wrong drink to work and rushes to get her out of the station to stop the disaster that has now occurred. Niko also reveals to Mel that she bought her the Cure album as a guilt gift because she cheated on her last week with her ex-fiance.

Maggie is able to reassemble the board and wishes her mother could help her. The board quickly starts talking to her saying “Release me!”. When Mel comes home, Maggie says they can bring their mother’s spirit back but they have to do it really quickly, and before Macy comes back. They do a spell and their mother returns from the board.

Marisol hugs her daughters, saying she was ready for them to have become the Charmed Ones, but she didn’t get the chance to tell them this before she died. She wants to see Macy, worried that she is with Harry, saying he is the one who killed her, wanting to steal their powers and then kill them all.

Meanwhile, Harry demands to know what is truly going on with the sisters, Macy's phone suddenly blows up with messages and he grabs her as she says, “Oh No!” Harry teleports him and Macy to the Vera Manor, where he discovers they used the spirit board again. He rushes towards Marisol’s spirit but Mel knocks him out Macy wants to know why her mother left her. Marisol promises to tell her but they need to find the “Prism of Souls” and it has to be hidden behind a mirror.

All three sisters go through and the wall solidifies on the other side. They find a pyramid which they believe holds the prism, and both Mel and Macy put their hands on it but Maggie feels that maybe the spirit wasn’t really their mother at all, because she couldn’t feel her. Mel says majority rules then and grabs Maggie’s hand. The sides open and the prism is revealed but suddenly the glass around them suddenly shatters and none of their powers now work. They finally join all their hands together and are able to finally escape, as Macy says she should switch to physics as she is pretty sure they just exited a multiverse.

Inside the house, Harry and Marisol are in a physical fight, with him throwing her off the top stairs and her yelling for her daughters to help her. He teleports to the bottom of the stairs, choking her and grabbing a knife but Macy stops it using her telekinesis to turn it on, Harry instead. He tells them the prism is used to suck out their powers and this is not their mother, only an impostor demon. They finally figure out it isn't her, when she tries to play favorites with them, which their mother never did.

Harry says the imposter demon needs to see her true reflection but they destroyed all the mirrors. Maggie is then able to use her cell phone to kill her and she explodes finally.

Harry then tells them they are not the first to fall for impostor demons before, and their real power is manipulation and the most vulnerable is people who have powers like Maggie. Macy admits she wanted to hear her mother say giving her up was a mistake but she should have just listened to Maggie instead. The sisters feel they have lost their mother all over again, as Harry agrees that this demon-fighting business can take its toll on emotions. Harry says he did not kill the janitor, but whatever the demon left behind had a fatal effect on her. Macy shows him what she found at the lab, he takes the sample with him, saying they now have a shared calendar and witch training starts tomorrow, telling them to be prompt and ready. They agree to trust Harry and to talk to each other. They don’t want to do the majority rules thing as it is about the Power of Three this time, which they shouldn't do.

Maggie goes to see Brian, saying she needs to trust her own feelings and this is completely over for good. She kisses him on the lips and leaves. Macy tells Galvin she is overreacting as she feels like an outsider with her sister.

Mel gives Niko a call, saying she loves her very much and will see her soon. Macy comes home to her sisters making the room more like hers and they promise to help her find the answers as to why their mother gave her up, wishing their mother had not given her up.

Harry suddenly teleports in and he learns that they nicknamed him "Meghan Markle", and he tells them that is crazy as he only comes when they call him with intent and purpose. Harry tells them that the black blob Macy found is from the Harbinger of Hell. It is the third and final phase of the Apocalypse prophecy and if the Harbinger finds a vessel, everything is going to change. The episode ends with Angela lying in her hospital bed.

Harry: "The underworld knows you're the Charmed Ones, and we need you to keep safe. You must call straight away if you see signs of increased demonic activity. Heavy fog, abrupt changes in temperature, rampant dog fornication, spontaneous human combustion, presidential tweets... oh."

Maggie: "So now that everyone is listening to me, I have to give you guys some personal advice. You need to stop living in the past. I know it's hard, but just forget you ever heard about Niko and Greta. That wasn't meant for your ears. And you need to apologize to Galvin. Hey, if you don't want me to read your minds, don't let me touch you." 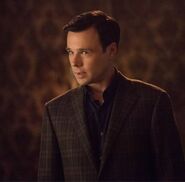 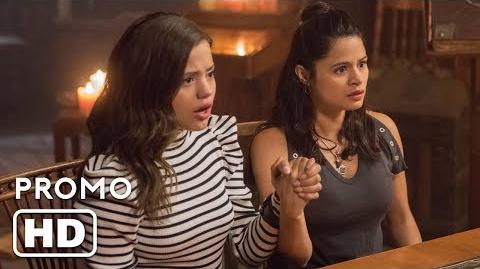 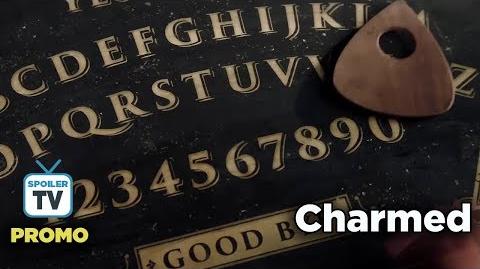 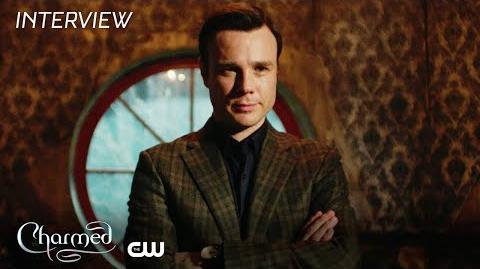 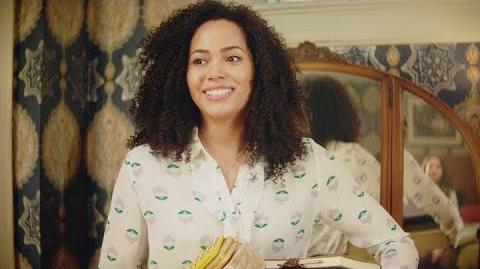 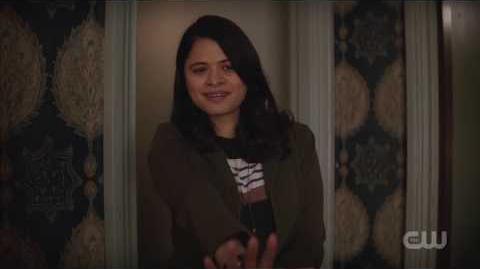