VISIONS — Macy (Madeleine Mantock) is not able to trust herself due to her memory lapses, so she asks Harry (Rupert Evans) and Charity (guest star Virginia Williams) for help. Stronger than she thought she was, Macy starts to piece things together and is eager to share her vision with her sisters. Meanwhile, Mel (Melonie Diaz) and Maggie (Sarah Jeffery) are worried about Macy and turn to an unexpected source for help. Nick Hargrove also stars.

The episode kicks off with Charity awaking a very confused Macy from a deep slumber, encouraging her to join her sisters and Harry for breakfast. Macy is clearly not herself, having no recollection of learning who killed her mom or seeing Charity kill Elder Bari. Macy’s odd behavior has not gone unnoticed by the rest of the family as Mel, Maggie, and Harry note over breakfast that Macy has not only begun sleeping a lot but she’s also become rather forgetful — two things that are very unlike her. The concern only grows when Maggie discovers a trio of burn bruises on Macy’s wrist and she has no idea how they got there. After promising (multiple times) to check in on Elder Bari, Charity, seeming worried about Macy’s memory lapses, gives her a summoning compass.

Over coffee, Maggie and Mel tell Macy that Fiona, Charity’s supposedly dead little sister, is alive. Macy wants to tell Charity and Harry the news immediately, noting all the times Charity has gone against the Elders for them, but at the urging of her sisters, who point out spilling the beans would be a massive betrayal to Jada, she ultimately agrees to keep quiet.

Very much back on, Harry and Charity lie in bed, reminiscing about their youthful plans to merge powers and run away. Charity tells him how much she misses those days but Harry reminds her that even then she sought the power she now possesses.

In her room, Macy is suddenly hit with a bunch of fragmented memories from the night Elder Bari helped open up her Evil Sight. Searching the attic for something that might trigger her memory, Macy realizes she gave herself the burn bruises on purpose, which could only mean something is very wrong. Suddenly, Charity appears behind her in the attic and, after remarking that it “didn’t work,” she performs a spell. Macy wakes up in her bed surrounded by her sisters, Harry, and Charity. The Elder tells Macy that she was summoned to the attic and when she arrived, Macy was unconscious.

Thinking it may be her demon instincts kicking in, Macy suggests she talk to Dr. Wagner at the lab, but Charity immediately shuts the idea down. Macy, now more panicked than ever about her unknown demon traits, inquires once more about Elder Bari’s status, which Charity shrugs off with a promise to find her.

While Mel and Maggie want to stay with Macy, Charity and Harry urge them to continue on with their day. Meanwhile, Charity sends Harry on a mission to track down Elder Bari, but not before planting an impression that Macy may have something to do with her disappearance.

At the lab, Dr. Wagner reveals to Parker that her serum prototype to combat the demon cells seems to be working and he’s getting better. He and Maggie celebrate the good news over brunch but are quickly interrupted by Lucy. Maggie, wanting to stay on Lucy’s good side now that she’s rushing Kappa again, invites her to join them. Lucy rushes off to pick up a round of bellinis but as she’s mesmerized by Alastair, she empties a vial of a mysterious liquid into Parker’s drink.

Harry searches for Elder Bari at her place and while perusing her desk, sees in her notes that the results of Macy’s tests had come in and she needed to follow up. Meanwhile, while dreaming, Macy has another memory, this time of Elder Bari using her needle to give Macy a booster shot. She goes to the attic to investigate and, seeing a trunk in the middle of the room, goes to open it. Still at Elder Bari’s, Harry hears Macy shriek for him and arrives to see her standing over the open trunk containing Elder Bari’s body.

Macy thinks she may have killed the Elder and while Harry disagrees, Charity poses a theory of self-defense, using the memory fragments Macy has relayed. Macy’s worried her demon side is causing blackouts and asks if there is anything they can do. Charity poses an “extreme” temporary measure that would include binding her powers. Harry, however, is dead against it because binding her powers risks losing the Power of Three forever. Despite not wanting to disrupt the Power of Three, Macy seems to be interested in hearing Charity out.

Macy sits her sisters down and reveals Charity’s suggestion to bind her powers, which neither of them is on board with. The conversation about binding her powers — and thinking she may have killed someone — quickly overwhelms Macy, and she runs off. Maggie and Mel want to seek another way to help her and opt to seek Dr. Wagner’s help.

Meanwhile, Parker’s tainted bellini catches up with him as he passes out in the Phi Delta bathroom.

Maggie and Mel take their concerns about Macy to Dr. Wagner but can’t provide enough information for her to diagnose Macy’s behavior as demonic. But when Maggie and Mel mention Macy’s burn bruises and that Charity told them self-harm is a demonic trait, Dr. Wagner scoffs. Noting her extensive personal history with demons, she’s never heard of it. Using a still from Maggie’s Kappa video college, Dr. Wagner looks at the burns, saying she’d need to see them in person to make a formal diagnosis. But Harry healed them at Charity’s urging, so they’re no longer there. During the conversation, it hits Mel that there’s something very dubious going on and that Charity is at the center of it.

In the attic, more memory fragments come back to Macy and she finds Elder Bari’s needle hidden under the couch. She performs the booster on herself, causing the complete memory from that night to come back to her — including learning that Charity killed Marisol and Elder Bari. Charity performs a spell after killing Elder Bari but Macy distracts her, hiding the needle under the couch and burning herself with the candles to help her remember. When she pulls the needle out, Charity is there. “If only you’d just left it alone,” Charity says to Macy, before performing a spell on her.

Macy wakes up in the Vortex Viribus under the house, where Charity is recharging her powers using a rune in the Vortex wall. When Macy yells to Harry for help, Charity tells her she severed his connection to the Charmed Ones, meaning nobody is coming to find her. The Elder tells Macy that killing Marisol was a mistake and that she just wanted to erase Macy’s memory so things could continue on as normal. She adds that her plan to bind Macy’s powers would have allowed her to destroy the memories forever. Now that the plan has been foiled, she has no choice but to kill Macy. She goes to use her powers, but Macy’s quicker and begins to strangle her. After losing the upper hand in the fight and desperate for a distraction, Macy reveals Fiona is still alive.

Mel and Maggie frantically search the house for Macy and Harry, who is nowhere to be found. In the attic, they find the summoning compass Charity gave to Macy but fail to summon the Elder. Harry suddenly arrives, revealing he hasn’t heard any of their calls for help. When they hand him the compass and ask him to summon Charity, he tells them it isn’t Charity’s summoning compass but rather a surveillance device. Now all on the same page, they think of the place she’d most likely be and realize it’s the one place she forbade them from going: the Vortex.

The trio arrives just as Charity is about to unleash her powers on Macy. Before Charity can say anything, Macy reveals that Charity was the one who killed Marisol. Mel wastes no time kicking Charity in the face while Maggie rushes to Macy. Charity knocks Harry out of the way using her magical binding whip before turning on the sisters, battling both Mel and Maggie before the Charmed Ones each grab a rune and use the Power of Three on the evil Elder. When they’re through with her, Charity’s powers are gone.

In the attic, Macy explains to Maggie and Mel what she saw happen to their mom. When they ask to see, Macy boosts her Evil Sight with the needle and each of her sisters grab ahold of her. While their mom was able to stop the smoke monster, her use of an unbinding spell prompts Charity to arrive. Charity reveals she’d been spying on Marisol due to her ties to the Sarcana. Marisol tells Charity about Macy’s death and revival due to necromancy, which horrifies her. When Marisol continues, revealing her three daughters are the Charmed Ones, Charity is further alarmed, worrying about the dangers that would come from the Charmed Ones being “tainted” by demons. When Marisol won’t stop the unbinding spell, the two fight and Charity sends Marisol out the window, where, in her dying breaths, she finishes the spell. Shocked by what she’d done and under the impression she’d stopped Marisol in time, Charity flees the scene just as Maggie and Mel arrive back home. Having finally learned the truth about her death, the sisters console one another, taking comfort in their mother’s bravery.

Downstairs, Harry interrogates Charity for having killed not only Marisol but the other elders who discovered what she’d done. She pleads with him, telling him she thought she was acting on behalf of the greater good when she killed Marisol but everything spun out of the control. Suddenly, Fiona arrives and says she wants a word with her sister... alone. If Charity was expecting a warm reunion with little sister, she’s sorely mistaken as a vengeful Fiona emerges. Sneering at how far she’s fallen, Fiona notes that while Charity always thought she was the “good one,” it’s she who is destined for greatness.

Maggie visits Parker, who, thanks to Alastair and Lucy, has been infected with a demonic virus. According to Parker, only his father will be able to cure him and it’s his sick way of trying to force his estranged son to reach out to him — which he has no plans to do. Maggie vows to find an alternative solution for Parker before it’s too late.

Despite being sent to rot in Tartarus for all of eternity, it seems we haven’t seen the last of Charity. As she’s being escorted to the fiery prison, her guards are taken out by Alastair and he escorts her to freedom. 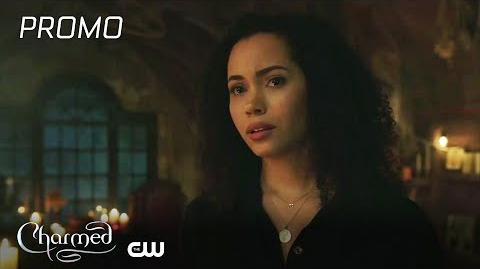 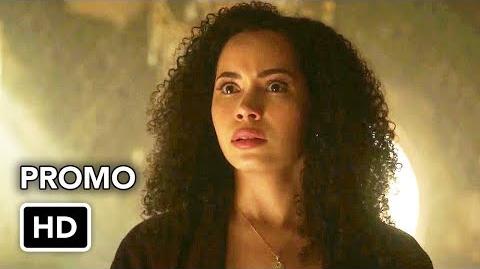 Retrieved from "https://charmed-reboot.fandom.com/wiki/Memento_Mori?oldid=39848"
Community content is available under CC-BY-SA unless otherwise noted.