Trip Bailey (In the Original Timeline)

Niko Hamada is a private investigator whose life was altered by the the Charmed Ones. Originally, she was a homicide detective for the Hilltowne Police Department and was in a relationship with Charmed One, Mel Vera, whom she left her fiancee Greta to be with. Niko's past was rewritten as so that her and Mel never met to keep her safe from the demon, Hunter Caine.

In the new timeline, she quit her job before becoming a detective and became a private investigator instead. Due to having never met Mel, Niko is still engaged to Greta.

Niko trained to become a police officer before being promoted to a detective. She was stationed in Lakeview, Michigan and was engaged to a woman named Greta.

But after meeting Mel Vera, Niko decided to leave Greta and move to Hilltowne to be with Mel. After joining the Hilltowne Police Department, she was partnered with Trip Bailey, someone she would become friends with.

Mel and Niko continue their relationship for two years until a tragic event forced them to split up.

After having her history rewritten by the Charmed Ones, Niko felt compelled to make a change in her life. Even though she was on the verge of making detective, she decided to quit her job and become a private investigator instead. However, she confided in Mel that being on the force almost gave her a nervous breakdown, leading her to never meet Mel and staying with Greta.

In Pilot, Niko and Mel were spending the night together when Mel received a text from her mother to come home. That same night, Marisol Vera was murdered.

Three months later, it was revealed that Niko and Mel had broken up.

They ended up getting back together shortly afterward but Niko's job and Mel's Charmed duties kept getting in the way.

When Trip got killed while investigating a string of deaths (the Elders), Niko started digging into the deaths, putting herself in danger. After a near-death experience, Mel realized that Niko would be safer if they never met. So, with the help of her sisters, she performed a spell to change the timeline to a version where she and Niko never met. This removed Niko from Mel's life but also kept her safe.

Niko returns to Hilltowne as a private investigator. She is currently hired by Jada's parents who are concerned that she might be involved in a dangerous cult. She officially introduces herself to Mel in "Witch Perfect." It turns out that she was truly hired by a couple of witch hunters that were after Jada, eventually resulting in their arrests.

In "The Replacement", Mel tells Niko that she is a witch, and in "Source Material", she gives Niko a ring that protects her from all magic, thus making her the only non-magical mortal still able to move around when Mel freezes time. In "Ambush", Mel reveals that she rewrote time to protect Niko, however Niko goes off on her, and shortly thereafter, she collapsed with her nose bleeding severely.

In "Red Rain", Niko was found at the hospital, but was not affected by the Harbinger, as the other patients were. Instead, she was affected by her memories flooding through her brain, which happened when Mel told her everything from her past history. When Greta, Niko's fiancé, came to see her, she took off the ring that Mel gave her, thus making her susceptible to the Harbinger, and she was eventually affected by it. She was eventually healed when Galvin Burdette sacrificed himself to heal all who were infected by the virus.

In "The Source Awakens", Niko's last known location was at a cafe, and Mel went there to say one final goodbye to her. She froze time, and Niko, wearing the spell blocker ring, was immune to the effects. She waved hello to Mel, but when Mel unfroze time, a bus drove between them, and when the bus left, Mel had disappeared.

Headstrong, brave in the face of danger, even if it meant the danger was supernatural. When she was on a case, she would pursue the matter despite the cost. She was also known to be very passionate.

Niko is an Asian woman that has dark brown hair that reaches her neck. She wears the typical outfit of a tomboy detective, generally striped shirts, jeans and heel boots. She used to wear thick glasses though she wasn't near-sighted.

"It's just I never questioned my ability to do this job before, you know? Even when people assumed I couldn't do it. But to have missed all the signs? Maybe they were right." —Niko doubting herself to Mel in Other Women. 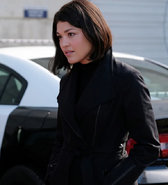 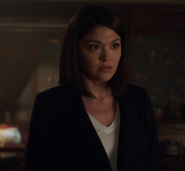 Retrieved from "https://charmed-reboot.fandom.com/wiki/Niko_Hamada?oldid=47947"
Community content is available under CC-BY-SA unless otherwise noted.