CLARITY — After some unusual seismic activity, Harry (Rupert Evans) informs the sisters that Hilltowne is a portal to hell. With that said, the sisters must band together to fight off a shadowy demon that is trying to obtain a collection of powerful magical artifacts. Meanwhile, Macy (Madeleine Mantock) is given an exciting opportunity at work which comes with unexpected complications. Lastly, Maggie (Sarah Jeffery) has a conflict of conscience over her relationship with Parker (Nick Hargrove). Melonie Diaz also stars.

The episode opens at a wine store with a man we haven’t seen. The lights go out. He looks to see whose around and a dark figure appears, throwing him across the room. The figure then seems to magically take over the mans body.

Parker shows up at Maggie's house. He asks her on a date now that Lucy has a new boyfriend. He wants to take her to Beyonce and all of a sudden becomes shirtless with a kitten. She’s obviously dreaming.

Mel wakes Maggie up by banging on her door and shames her for dreaming about Parker. Maggie says she’s dreaming about him because she’s trying to stay away from him in real life. Mel agrees this is a good idea and Maggie asks if they are ever going to tell Macy about seeing their mother during their 80’s flashback. Mel says it’s better to keep the secret.

Macy is in her room with the key she discovered inside the houses main pillar. She puts it on a necklace and heads downstairs to eat breakfast that Harry’s made.

Harry asks if anyone felt some seismic activity. The girls admit they did feel some type of shift, and Harry reveals that there was a hell quake. It’s an earthquake only magical beings can detect. Maggie talks about how she’s missing classes because she’s a witch and she doesn’t feel like she’ll ever have a normal life. Mel talks about how she’s a bartender for the time being because she can’t find anything better. Macy is worried about her new boss at the lab.

As the other sisters leave, Harry asks when Mel will be handing her thesis proposal in, since it was due 6 weeks prior. She plans on getting it in soon, but she’s busy saving the world.

Macy goes to meet her new boss, Julia Wagner. Julia assures her that they plan to do groundbreaking work in the new lab and wants to promote Macy to lab supervisor. Macy accepts, and Julia tells her theres a budget shortage, so someone needs to be laid off. That person is Galvin, and Julia wants Macy to be the one to do it.

Parker catches up with Maggie at University. Parker reveals that Lucy actually DOES have a new boyfriend, not just in Maggie’s dreams, and Lucy has given the full go ahead for Parker and Maggie to date. Parker asks her out, and Maggie accepts, as long as it’s low key.

Mel is trying tow work on her thesis about intersectional feminism while she’s working the bar when a new woman walks in, who notices her. Mel facetious Maggie at home to make sure she’s taking school seriously. Someone knocks at the door, and it’s the man from the wine store, who falls into the house and passes out, leaving Maggie flabbergasted.

The girls and Harry bring him to the couch and lay him down. When they take off his shoes, they realize that he’s actual a satyr. The man wakes up and immediately recognizes the Charmed Ones. He says that if you need help, word is to go find them.

The man's name is Leon. Harry tries to talk to him but he’s only interested in the witches. He tells the story about the shadowy figure reaching his hand into his stomach and leaving a strange mark. Leon explains that his secret is that he is the protector of the scythe of Tartarus. Harry explains that once the scythe (broken apart for protection) is fully assembled, you can strike it on the ground and set any prisoner in Tartarus (a hell prison for demons) free. Harry tells them they have to make sure they have to get possession of the other two shards.

The scene switches to Alistair, who is talking to the shadowy figure. He’s explaining that he can’t seem to open the paint can containing the harbinger of death. He wants to get into Tartarus so someone can instruct him on how to open it correctly.

The next morning everyone is hungover.

Harry tells Macy to look for DNA traces of the demon on the residue from Leon's wound, Mel plans to research, and Maggie says she’ll keep track to see if anyone reports seismic activity.

Maggie and Parker go on their date in a park. They talk about their parents, and how Maggie feels like she’s aimless compared to her sisters. Parker talks about how he feels like a disappointment to his father. Parker tells Maggie she understands him and they share a kiss. While kissing, Maggie reads Parkers mind and hears him thinking that he can’t let her find out the truth.

Maggie is on the phone explaining what happened with Parker to Macy. Macy explains that a dark thought doesn’t mean he’s a dark person.

Macy hangs up and meets Galvin for coffee. He congratulates her on her promotion. Macy keeps trying to fire him but she can’t quite get it out, and then he has to go.

At the frat house, Maggie looks for Parker, bringing him some champagne, wanting him to open up. She catches him shooting something into his arm and runs away.

Back at the house, Mel thinks they are dealing with a shadow demon. Harry wants her to work on her thesis instead of research. He suggests that maybe she should freeze time to help her since it would be minimal personal gain, but another power outage is reported and they have to go.

A lady is attacked by the shadow demon and another piece of the scythe gets taken, as the girls and Harry show up. The shadow demon gets away. The female says she felt like she knew it was coming. She ends up being an Egyptian fertility goddess.

Macy thinks that maybe the shards are magnetic to each other. That maybe they are reaching out to each other. All of a sudden there are thousands of insects outside their house. Macy realizes that the last shard of the scythe is in the manor.

The sisters discuss the possibility of their mother having used the shard. Macy wants to let the insects in and let them lead them to the shard. Macy opens the door with her powers. The insects come in, and head to the attic. Mel freezes them, and Macy moves them out of the way. Maggie opens the box and finds the last shard. Suddenly there's an earthquake and the shard start to tremble, along with the key on Macy’s neck.

The shard grabs onto the necklace and the insects get free and flee.

Macy reveals she’s been wearing the key for a week. Maggie realizes it was the key their mom was wearing in the ’80s when they saw her. It is the key that can open Tartarus, and Macy activated it. She says she didn’t say anything because she was afraid of what her sisters would say.

The sisters come up with a plan. They wait for the demon to come. When he arrives for the shard, the sisters do a spell to control the demon, but he breaks free, knocks Mel over and then pulls Maggie through the floor. While they are fighting, the shards come together and the scythe forms. When Maggie touches him, she replies he’s in pain.

The girl from the bar shows up in the house out of nowhere and ends up taking the scythe for herself.

Mel explains that she knows the mystery woman, but Harry doesn’t think she’s a demon since she can teleport. Maggie is thrilled over her emotions expanding and claims that it seemed like there was a bit of humanity in him somehow.

Harry wants to take a look at Mel’s injuries and they realize her bruises are identical to their mom’s before she died. The sisters realize that they shouldn’t have lied to each other. Mel and Maggie admit they saw their mother in the ’80s and that she was afraid there was something wrong with her baby (Macy).

Macy thinks there must be some evil in her, but her sisters tell her not to jump to conclusions.

Macy goes to Julia and tells her that she doesn’t want to fire Galvin because he’s an asset to the team. To solve the budget shortage, she wants to test things in house and find a way to make up for the remainder of the money. Instead of Galvin, she ends up firing the slacker of the lab.

Mel decides to drop out of school and she’s no longer sure what she wants from life.

Parker shows up to explain himself to Maggie. He claims that what she saw wasn’t about drugs, but medicine. That he needs the injections to stay healthy, and he has a rare autoimmune disorder. He says he is lucky if he makes it past age 40. Maggie is the first person that he has told. Maggie reads his mind again, and she hears him thinking about how happy he is that he told her the truth.

The shadow demon appears to Alistair and it’s revealed that it’s actually Parker. Alistair is his father. Parker apologizes for not getting the scythe. Alistair says that he should have sent Parker’s brother to do the job since Parker is only half demon. Parker admits to Alistair that Maggie can read minds. Alistair plans to use it against the Vera-Vaughns and warns Parker not to fail him again.

Harry: "I’ve been watching human nature for decades and everyone has the capacity for darkness. It’s your actions,, not your nature that defines you."

Leon: "The word is out in the magical matrix that if you need help, to come here." 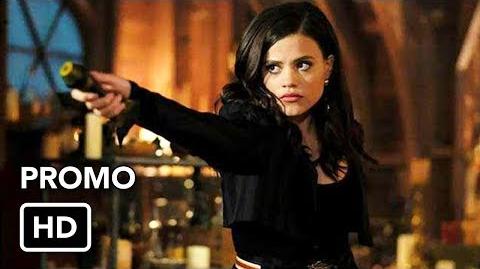 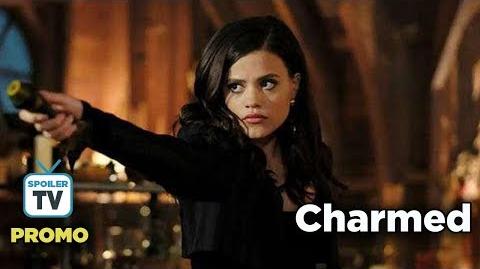 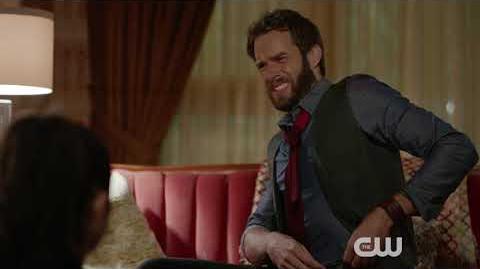 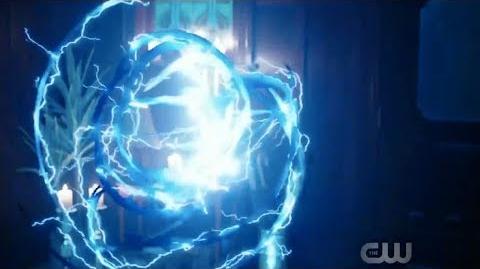 Retrieved from "https://charmed-reboot.fandom.com/wiki/Out_of_Scythe?oldid=44144"
Community content is available under CC-BY-SA unless otherwise noted.