HELP IS ON THE WAY – Harry (Rupert Evans) and Macy (Madeleine Mantock) make a startling discovery; Maggie (Sarah Jeffery) teams up with Abby (Poppy Drayton) against an unlikely foe. Mel (Melonie Diaz) must save Kat (guest star Shiva Kalaiselvan) from an uncertain fate.

This episode starts with everyone trying to figure out what the story is with Jordan. Maggie and Jordan are boxing in the gym, and she takes him to a cloth that he wiped his forehead with because she needs his sweat to do a spell to find about him. After performing the spell, they find out he had a curse put on him by a witch and assume he must have done something bad to warrant that. There is a message on the switchboard saying that there is danger in the Sacred Grove. They go there and see that someone has killed the dryads, which protect the grove.

The sacred fruit is also missing, which can be used to ward against magic. They think it was Abigail and find her. She says it was not her, but Parker and she and Maggie go to him, and he is now the Overlord. Maggie and Abigail are taken away by guards, but Parker tells them not to talk Maggie away. They speak, and Parker says he wanted to be the overlord so he could stop the fighting between the different bloodlines.

Meanwhile, Macy and Harry are still trying to figure out why Jordan had a curse put on him, and Harry puts a cloning potion on his ring and takes the clone. They perform a spell to see the history of the ring, and they see one of Jordan’s ancestors was a witch hunter and put a curse on him for five generations of males in his family to die at 25.

Harry asks how old Jordan is, and Macy tells him he’s 25. Mel sees Katrina again, and she says she is leaving because she hears voices, and her mother is taking her to a hospital. Mel brings her to her house and shows her a video of her mother. Katrina recognizes her voice, and Mel tells her she is a medium.

Meanwhile, Maggie is still with Parker, and Abigail has been taken into custody. They are trying to figure out who made the fruit and give Abigail truth serum. She says she took the fruit, and she will not stop trying to kill Parker. Parker wants to execute her, and Maggie talks him out of it, and he agrees to strip her powers and keep her in the imprisoned.

Parker says he wants Maggie to stay, and they would work well together since they were able to find a way to deal with Abigail without bloodshed.  Parker then asks Maggie to marry him. In the end, the demon who was working with Maggie and Parker, Godric, goes to Abigail, and it is revealed that he took the fruit and gave some to Abigail so she would not be affected by the truth serum.

Macy: "I'm starting to think we'd be better off without you all together."
Abigael: "Oh, someone's getting rough. Perhaps your time with the darklighter paid off."
Macy: "Maybe it did."

Harry: "Do you really think I'd be that stupid? She's dangerous."
Macy: "Yeah well, sometimes danger can be exciting."
Harry: "Not when you're thinking clearly."

Maggie: "So how do you feel about Harry?"
Abigael: "I find him adoringly wretchedly endearing and I'd love to corrupt him in a sexual way. Bloody hell." 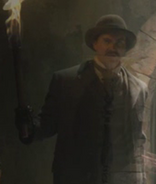 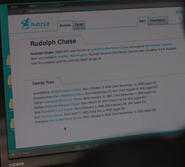 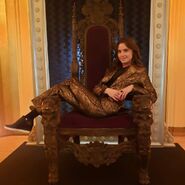 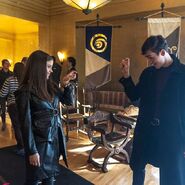 Charmed Season 2 Episode 7 Past Is Present Promo The CW

Charm Reboot - Powers (2x07)
Add a photo to this gallery

Retrieved from "https://charmed-reboot.fandom.com/wiki/Past_is_Present?oldid=47976"
Community content is available under CC-BY-SA unless otherwise noted.