Ruby is a retired witch, and a bartender at SafeSpace, Seattle whom had been crushing on Mel Vera for a period of time before eventually asking her out.

Ruby's father died before she was born. She was raised by a single mother who always said Ruby was "special" and never hid anything from her daughter. When Ruby was 16, her mother brought a man into their lives who turned out to be a demon and tried to kill them both. It shook Ruby's mother to her core, so she wanted out. At the age of 18, Ruby received permission from her mother to choose her own life path, but Ruby also chose a normal life without magic and ended up in Witchness Protection.[5]

In "Needs to Know", Ruby sees Mel Vera when she approaches the bar, they have a brief conversation, after which Ruby asks her out. Mel doubts that she can start a new relationship right now, and Ruby leaves her number on a napkin if she changes her mind.
Later, after the death of Helen McGantry, Mel decides to put aside her fears and doubts and go on a date with Ruby.

In "Breaking the Cycle", Mel wakes up the next morning with Ruby and meets her roommates who approve of her.

In "Unsafe Space", it is revealed that Ruby is also a witch, having been placed in Witchness Protection two years after almost being killed by her mom's boyfriend who turned out to be a demon. Ruby's mother gave up her powers to avoid repeating the trauma two years prior after the trauma.

When Ruby turned 18, she was given the choice to "retire" being a witch as well, and she ultimately chose to. While she no longer had her active powers, she retained her basic abilities of spell casting and potion making. When Mel ran into her at the club where retired witches frequent, Mel realizes the truth. Because they needed to sneak inside the Command Center, Mel asked Ruby to borrow her portal-making marble to them. She agreed out of caring. However, after Macy and Maggie were both trapped inside the marble, Mel learned that she needed Ruby as well to make the marble work. She persuaded Ruby to help them free her sisters and break into the Command Center. When Jimmy tries to escape, Ruby casts a wind spell to keep him from entering the portal he created, allowing Harry to neutralize his powers and knock him out.

Ruby and Mel have a conversation at the docks, where Mel tries to convince her to embrace herself as a witch to no avail. Ruby wishes to be with Mel without partaking in her Wiccan life. This puts them at odds with each other.

In "Someone's Going to Die", While she's with Mel Ruby starts coughing up ash. Mel brings her to see the others at the base where they speak with The guardian who tells them magic is dying.

In "Triage", Mel and Abigael Jameson-Caine time travel to the year 2070 to Hilltowne's cemetery where they see an much older Ruby laying flowers on Mel's grave, telling her granddaughter that Mel to sacrifice herself for the magical world which Mel hidden from sight get emotional at sight of older Ruby since it means she survived. Mel tells Abigael they must go back to their time which they do.

In "You Can't Touch This", Mel informs Maggie that she has a long-distance relationship with Ruby due to a magical infection.

In "Perfecti Is the Enemy of Good", she took care of Mel while Maggie and Macy tried to find a way to defeat Mo and Aladria. Ruby was there when Mel came out of her coma, and she was the first to see Mel's pregnancy sent from the future. 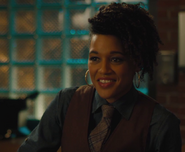 Mel goes out with Ruby

Ruby and Mel sleep together

Old Ruby and her granddaughter in 2070

Retrieved from "https://charmed-reboot.fandom.com/wiki/Ruby?oldid=48478"
Community content is available under CC-BY-SA unless otherwise noted.