Shapeshifting is the power to alter one's form and appearance. The ability to shapeshift seems to be one of the most common powers in all of magic, as it is used to blend into the world of mortals and to deceive other beings.

Many magical beings are shown to possess some ability at altering their physical forms. For the most part, this is in order to blend in with the human world. Most demons seem to possess a limited form of shapeshifting, allowing them to shift from their human form to a more demonic form. Some demons have the ability to affect their eyes, ranging from a change in color (mostly red or black) to completely distorting where the eyes should be. The demons known as Shapeshifters are a special class of demons which carry this ability at its full potential and can use it to completely take the form of other people. The demon, Hunter Caine, was capable of shapeshifting into anyone, although he required physical contact with his intended target first. Pixies are also capable of taking a more human appearance, as opposed to their usually tiny, glittering forms.

Many demons possess a limited form of shapeshifting to change from a human form to a demonic one. This only allows change between these two distinct forms. This form generally occurs when demons, who are able to suppress their power, call upon their full magical strength. Many users of this limited form use their human form to blend into human society and avoid detection. Some demonic beings may possess specific forms in which they take, such as Gorgons. The true form of Gorgons are women with green snake eyes, long fangs and claws, and snakes instead of their hair. Medusa, contrary to popular depiction, had only one snake at the top of her head.

All pixies possess a limited form of shapeshifting, allowing them to assume a human appearance. The true form of pixies are small glowing creatures with large transparent wings. They are like fast-flying balls of yellow light and glitter. 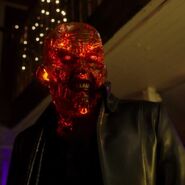 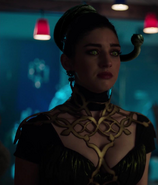 Add a photo to this gallery
Retrieved from "https://charmed-reboot.fandom.com/wiki/Shapeshifting?oldid=47680"
Community content is available under CC-BY-SA unless otherwise noted.