The University of Cambridge (For a semester abroad)

Meagan Tandy
Summer is a sports journalist who began dating Galvin Burdette after he believed Macy Vaughn was blowing him off. The relationship was short-lived, as she broke up with him shortly afterward for unknown reasons.

Summer went to an Ivy League for college and while there, she decided to study abroad for a semester at the University of Cambridge. After she graduated, she began a successful career as a sports journalist and would start a podcast that would get picked up by NPR.

She presumably went to Hilltowne University's homecoming because of her job. While there at a tailgate party, she met Galvin Burdette and immediately started a relationship with him.

Summer returned to Galvin's place later that night when she heard someone at the door. She opened it to find Macy and Maggie and was thrown off by Macy trying to vanquish her since she had believed that Summer was a succubus. Summer believed Macy was high and jealous and decided to cover for her when Galvin came to the door.

In Kappa Spirit, Summer was at Galvin's birthday party. She overheard Harry talking about Welsh rarebit and got excited since she lived off of it when she was at Cambridge. She told Macy that he was a keeper, believing the two to be dating. Afterward, she saw Macy checking out Galvin and stepped into her view as she glared at her. She would later see Macy and Galvin talk comfortably, prompting her to intervene. Believing that Macy was trying to advance on Galvin, Summer confronted her and threatened her to back off.

In Bug a Boo, Galvin informed Macy that Summer had broken up with him.

Summer is kind to everyone she meets and was even understanding of Macy when she barged into Galvin's apartment to vanquish her. She does have a limit though as seen when she believed Macy was checking out Galvin and warned her to back off.

Summer is an extremely beautiful black woman that was described by Maggie to be "surface-of-the-sun hot" and "ageless".

"Listen. I get it. I've done crazy things when I was jealous and drunk. Or are you just super stoned? Either way, if you go now, I won't tell Gal—"

—Summer to Macy in Other Women.

"It's nothing, babe, I left my wallet at the bar, and Macy was considerate enough to return it."

—Summer covering for Macy in Other Women.

—Summer to Macy in Kappa Spirit. 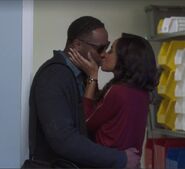 Add a photo to this gallery
Retrieved from "https://charmed-reboot.fandom.com/wiki/Summer?oldid=36704"
Community content is available under CC-BY-SA unless otherwise noted.