HALLOWEEN PARTY TIME — With the instruction of Harry (Rupert Evans), the sisters are put through witch lessons, so they are able to properly practice their magic. However, when Macy (Madeleine Mantock) learns about a mysterious death in her lab from Galvin (Ser'Darius Blain), she informs her sisters and together they devise a plan to suss out the demon. Trying to speed the plan along, Mel (Melonie Diaz) uses her magic irresponsibly leaving Harry no choice but to constrain her, which creates tension between them. Meanwhile, Maggie (Sarah Jeffery) continues to struggle at balancing her two worlds—her sorority one and her witch one—especially after she volunteers to throw a Halloween party at her house. Ellen Tamaki and Nick Hargrove also star.[1]

The episode begins with the sisters in the middle of a demon vanquish, which was really just training done by Harry to get the sisters to grow as witches and really a simulation. However the sisters each face a problem in their training, Mel is overzealous and reckless with her powers, Macy keeps getting in her own head, and Maggie’s attempts at juggling Kappa and witch duties has her succeeding at neither. But Mel does manage to vanquish the Skeleton Demon simulation.

Harry advises the sisters to sit tight and keep training reminding them that the Harbinger of Hell is somewhere in Hilltowne and they need to be ready for it. He informs them that the Elders are seeking out to find the Harbinger's Vessel. Mel, however, has other plans of her own and takes the Book of Shadows to find her answers, only to be interrupted and nearly caught out by Niko.

The next morning, Niko nearly catches Macy using her powers to move eggs in the kitchen. When Niko leaves, Mel tells Macy that they need to take matters into their own hands at finding the vessel. Macy remembers the Harbinger’s black goo contained sulfuric acid, which causes a major reaction when mixed with sugar. The two sisters devise a plan to suss out the vessel using baked goods, in honor of Halloween naturally.

Meanwhile, Maggie sits the plans out with her sisters due to her Kappa duties and having picked up extra shifts at the restaurant where she now works. Lucy who is also eating at the restaurant is celebrating Kappa’s success in helping Angela Wu awaken from her coma via bedside vigil, takes the time to remind Maggie of her spot in the sorority, causing Maggie to offer up her house for Kappa’s Halloween party.

Angela awakening from her coma is now major news on campus. When Mel hears the news, she freezes time in the classroom where she’s working as a TA. Which frustrates Harry, who so happens to walk in on the frozen classroom. The two then argue about her use of magic, and Harry is tired of her ignoring his lectures. Harry conjures a magical bracelet onto Mel’s wrist, which notifies him every time she uses magic.

Meanwhile, in the Hilltowne lab, Galvin appear to be getting closer and are very flirty around each other. Expressing dismay that she didn’t show up in costume, he makes her part of his group DNA helix costume. However, when Galvin asks Macy out, she says no, trying to be “realistic” because she and Galvin are coworkers.

On campus, Mel runs into Angela and fills her in on their mother’s death. Mel also uses the opportunity to give her a cookie but unfortunately, the Harbinger spots Mel’s sugar ploy from a mile away and manages to remain undetected.

Later, In the dorms, Mel runs into Niko, who is investigating a missing student. Niko suspects something is up with Mel and she is hiding something. Mel frustrated by being unable to tell her the truth freezes the hallway and explains everything to Niko. The use of magic alerts Harry, who reminds Mel against spilling the beans on her powers.

The sisters and Harry later find out about Maggie’s Halloween party and reluctantly decide to go along with it, hoping to rule out Hilltowne students as potential vessels. As Maggie glamorizes the house and party using magic, Harry reminds her that the sisters aren’t supposed to be using magic to “live their best lives” and their actions will have personal gain consequences. Maggie doesn't listen to him and brushes it off.

Mel shows up at the party dressed as a witch, and Macy attends the party dressed as Ruth Bader Ginsburg, which has Maggie in horror at a poor choice. She takes Macy off to find the perfect costume, however, Macy doesn't like any of the choices, and Maggie expresses her frustration that Macy won’t open up about what she wants. Macy begins to share a story about her past with Maggie, revealing that she was sent to boarding school in high school and as one of the two students at the school who wasn’t white, she felt forced to play a role, wanting to be the smart and serious one while her friend was the funny and sexy ones. Finally understanding her sister, Maggie vows to find her the perfect costume that’s both smart and sexy: Persephone, goddess of the underworld it is.

Macy's costume keeps Galvin very interested, who is looking is dressed as James Bond. But just as it seems Macy’s about to tell him she does want to go on a date with him, Mel suddenly pulls her away due to a major Harbinger-related emergency.

Niko ends up getting called from the party to investigate three dead bodies that have been found on campus, all murdered by the Harbinger of course. As the victims are the president of an abstinence club, a nun, and Cam, the Professor Thaine defender from the pilot. The sisters and Harry deduce that the Harbinger is targeting virgins. With a killer out there and a party going on in their house, Macy, Mel and Maggie decide to seal the house with a protection spell to keep their guests safe. However, Angela, who enters the party as herself, the Harbinger is already inside.

While preparing the protection spell, Mel and Harry continue to disagree and have a tense conversation. Mel hates that she has to hide from Niko, explaining that she never had to hide who she was because she grew up in such an accepting environment after she came out gay. She feels that being forced to keep this secret makes her feel like she’s trapped in the closet again.

the Charmed Ones try to seal the house but it doesn’t work because the Harbinger is already inside. Macy, reveals that she’s a virgin, and volunteers to be the bait to draw the harbinger out. However, when the Charmed Ones attempt the spell to vanquish the Harbinger, the consequences of glamorizing the house affect Maggie, and interferes with their opportunity. With Angela after her now, Macy takes off and Maggie temporarily saves her, hitting the Harbinger with a massive branch. However, she quickly recovers and Angela attempts to take the sisters out. Despite Harry’s warning, a very desperate Mel uses a dangerous spell from their simulation. The spell takes Angela down but knocks Macy out, causing Mel to worry she just killed her sister, though luckily, Harry is able to heal her right away.

As Macy and Maggie head back to the house to put an end to the party, Harry and Mel have a bit of a breakthrough in their disagreement. Mel admits that she was right in that she was using her powers recklessly and Harry surprises her by complimenting her for correctly deducing Angela could be the vessel and ultimately taking the demon out.

Harry also opens up a little bit about why he’s so protective and at times, and reveals that the Charmed Ones aren’t his first charges as Whitelighter, revealing that Mel reminds him of Fiona, another witch he looked after who shared her secret to the wrong person and was institutionalized for it, leading to her death. Harry also adds that Fiona’s death changed him as a Whitelighter, pushing him to become more cautious all the time. Mel tells him she’s done being reckless but reminds him that she's no Fiona. Harry releases the bracelet and promises to Mel that once the danger they’re currently facing is gone, he’ll try to help her get permission from the Elders to tell Niko the truth.

Back at the Vera Manor, Macy, having nearly been killed and no longer looking to over analyze her relationship with Galvin, kisses him. Maggie meanwhile, seems to be working her way back into Kappa’s good graces, as Lucy says the party was a success. However, Maggie also learns that Parker, she ran into many times throughout the day, is really Lucy’s boyfriend.

The Book of Shadows

Mel: "Harry, you were right. I was being reckless and I almost killed Macy."
Harry: "See? Teachable moment. But lest you forget, you also brought down an immensely powerful demon and you were the first to suspect Angela Wu might be the vessel."
Mel: "Hold on. Was that a compliment?"

Maggie: "He's obviously so in love with you."
Macy: "We work together. The last thing I need is some tumultuous breakup jeopardizing my career."
Penelope: "Sex and booze are a sure way to lose."
Macy: "You realize this is the exact same thing you were doing with your powers?"
Maggie: "Getting lost in your head instead of letting this love story play out?"
Macy: " No, Maggie, I'm being realistic."

Maggie: "I owe Lucy $200 for a pledge retreat, so I had to pick up an extra shift. "
Mel: "You're right, that is way more important than saving the world from certain doom." 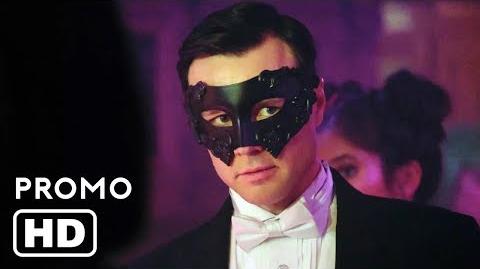 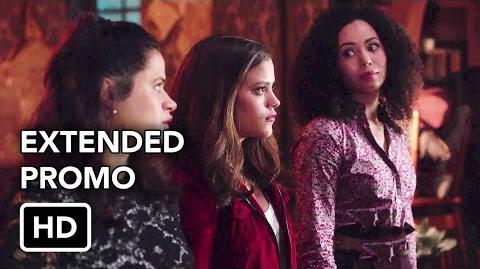 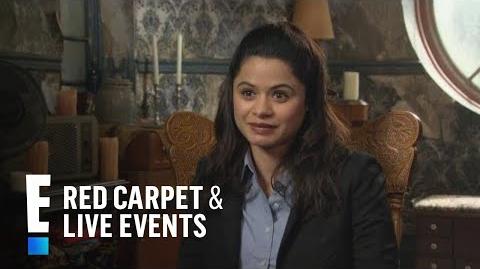 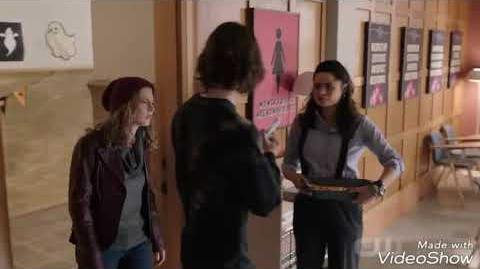 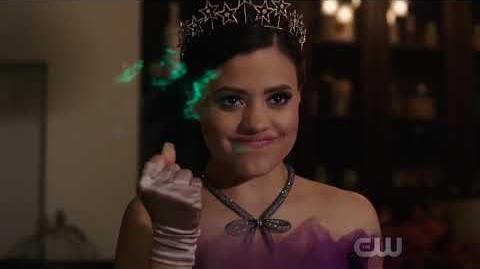