FREAKY FRIDAY — Maggie (Sarah Jeffery) shows Macy (Madeleine Mantock), Harry (Rupert Evans), and Charity (guest star Virginia Williams) the strange room under Vera Manor but they quickly learn just how dangerous it is when Mel (Melonie Diaz) and Maggie switch bodies and powers. Macy turns to the Elders for guidance about how to overcome her inner demon, which in turn leads her to have an eye-opening experience. Meanwhile, Maggie learns the secrets that Mel has been keeping from her sisters. Nick Hargrove also stars.

The episode opens with Macy conferring with the Council of Elders about her death, revival, and the little demon problem. While most of the Elders are in shock, Elder Priyanka Bari, who introduces herself as an “expert in demon-witch interminglings” — and who also happens to be in charge of the investigation into Marisol’s death — indicates she may be able to help Macy get to the bottom of it.

However, before they’re able to get any further, Charity and Macy are summoned into the stone chamber under the Vera household by Harry and Maggie. Assessing the chamber, Charity and Harry deduce they’re in a Vortex Viribus, a hub of power that can essentially heighten a witch’s power to reveal previously uncovered powers. Given the precarious nature of the room, the pair warn Macy and Maggie not to touch anything but too late…

Meanwhile, absent from the situation at home, Mel is off with Jada, trekking through the mythical Irish Isle of Hy-Breasal in search of a relic needed to help the Keeper, the weakened Sarcana sister rescued from Tartarus, regain her strength. After Mel peppers Jada with questions about the mission — and after being sworn to secrecy — she learns the mysterious sister is Fiona Callahan. Jada reveals Fiona is Keeper of a primordial power source known as the Sacred Flame. However, when Fiona fell in with the Sarcana, the Council tried to destroy her, but as the Keeper is immortal, they banished her to Tartarus instead — and not even Harry and Charity know she’s still alive.

Upon their return home, Mel’s phone is flooded with missed calls and texts from Maggie. While Mel is hesitant to lie to her sisters, Jada is quick to remind her of the vow she just made before departing. Maggie confronts Mel about where she’s been for the last day. Mel wants Maggie to give Jada a chance but Maggie just wants her older sister to understand her concerns. The two quickly sink into a very heated fight full of insults and accusations — which include Mel calling Maggie oversensitive, a baby, and chiding her decision to rush Kappa again as superficial.

Meanwhile, Macy has a very realistic dream involving her chasing a man around the quad before turning him into stone. Early the next morning while on a jog, she’s stunned to see the event actually happened.

When they wake up, Maggie and Mel are panicked to find themselves in the other’s body. Harry deduces the body swap was caused by Maggie touching a rune stone in the Vortex, which amplified her powers when she used them on Mel during their fight. The Book of Shadows’ easy fix to their Freaky Friday situation is complicated by the sisters discovering their powers stayed in their bodies…meaning now they can’t swap back until Mel learns to control Maggie’s empath powers.

As the three try to find an immediate solution to their problem, Macy races into the kitchen with a “freaky” problem of her own. Considering she also touched a rune in the Vortex, Macy thinks she may have accidentally amplified her demon powers.

Team Charmed head to the quad to check out the stone statue, which is surrounded by people as its Banksy-esque sudden appearance has caught the attention of Hilltowne’s pretentious art scene. Unable to use Mel’s powers to freeze time, Maggie uses her gift of gossip to drive the crowd towards another nonexistent art piece on campus. Macy wants to report what happened to the Elders — namely Elder Bari — but Mel is very wary about the Elders and what they would do if they found Macy to be too dangerous.

Unable to find a temporary solution to their problem, Mel and Maggie resort to walking in the other’s shoes for a day — literally — as Maggie-as-Mel is tasked with bartending at The Haunt and Mel-as-Maggie has Kappa rush duties to attend to. However, Maggie quickly capitalizes on the body swap situation after receiving a text from Jada and makes plans to see her. Meanwhile, Mel’s worst nightmare comes true when she’s ambushed by a pair of Phi Delta bros and is whisked off to a toga party with the other Kappa rushees.

As Elder Bari runs some tests on her, Macy wonders what will happen to her if her demon traits are deemed dangerous. Charity attempts to reassure her but Elder Bari looks very wary. When Charity takes Elder Bari into the hall, she reveals the Vortex awoke something within Macy and they may not want to cure her, even if they can.

Later, Harry informs Macy that two more statues have turned up on campus, meaning Macy isn’t responsible for them. A relieved Macy reveals the sample of stone she had tested in the lab is from 800 B.C., and the two figure out that Medusa has been unleashed on campus. Macy is also deeply disturbed to learn from the Book of Shadows that Medusa was once a witch who, after being raped by Poseidon, was turned into a Gorgon as punishment. While Charity tries to convince Macy that Medusa must be destroyed, Macy feels a kinship with Medusa and tries to get the Elder to reconsider.

While initially deeply mistrustful of Jada and the Saracana, Maggie’s sleuthing at Jada’s proves to be a transformative experience as she meets Fiona and learns about her decade in Tartarus as a result of the Elders. Speaking of her irrevocably broken relationship with Charity, the weakened witch warns Maggie against anyone trying to get between her sisters, especially the Elders.

At the toga party, Medusa has begun turning attendees into stone. Charity, Harry, The Charmed Ones, and Parker hash out a plan to stop Medusa. Having learned the truth about her, Macy is still not on board with Charity’s plan to behead Medusa. The Charmed Ones learn that Daphne, one of the Kappa rushees, accidentally summoned Medusa after being slut-shamed by Phi Delta brothers — with many others in the Greek system actively complicit. Just then, Medusa unleashes her powers en masse, causing everyone at the party, save the Charmed Ones — who are protected under a magical shield — to turn to stone.

The sisters corner Medusa but Macy is unable to kill her. Realizing she just wants to be seen, Macy looks Medusa in the eyes and tells her that she’s sorry she’s been carrying so much blame for centuries, adding that what happened to her is not her fault. Having finally felt understood and heard, Medusa turns herself into stone and disappears, releasing everyone from their stone captivities.

Despite having little faith in Greek life, Mel confronts Lucy about Phi Delta brother slut-shaming women all over campus, including Daphne. To her surprise, Lucy agrees and vows to report it, while Parker kicks the offending brothers out of the fraternity.

Having spent the day living the other’s life, Maggie and Mel are finally at and understanding. After having a heart to heart, the sisters are finally able to switch back into their rightful bodies.

Meanwhile, Macy and Charity have a conversation about demons. Macy wonders if the entire conversation surrounding demons and good and evil is misguided. Having used her demonic traits for good with Medusa, Macy thinks maybe there’s a way to channel her demon powers into something positive. It seems the Vera sisters have had quite an influence on Charity because, despite it being wildly against Elder code, she seems to respond positively to Macy’s arguments. However, their conversation is interrupted by news of Macy’s test results from Elder Bari.

Alone in the attic with Macy, the Elder reveals the Vortex awakened Macy’s gift of Evil Sight, which allows her to see through the eyes of those doing evil deeds — in both present and past. In fact, Elder Bari believes they may be able to use the power to learn who killed Marisol and the Elders. Using her magical hairpin to boost the power, Macy sees that Charity is the one who killed her mom. Just as Macy reveals what she saw to Elder Bari, Charity appears behind the Elder and kills her.

Mel (as Maggie): "I just did more shots than I thought physically possible and I am barely buzzed. I really have to talk to Maggie about her underage body's high tolerance for alcohol. 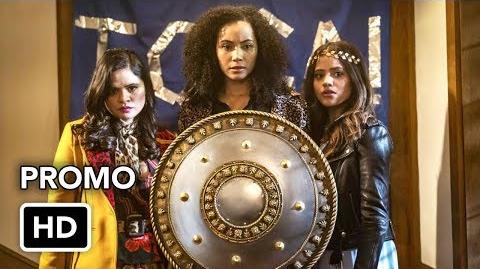 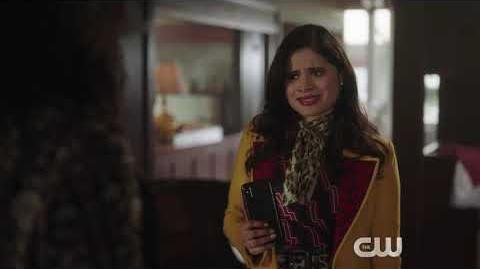 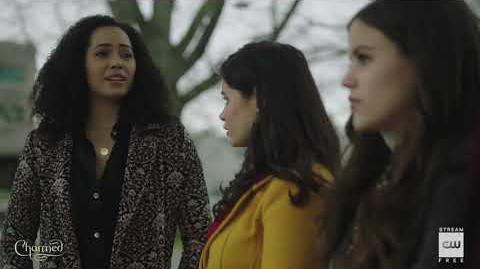 Retrieved from "https://charmed-reboot.fandom.com/wiki/Switches_%26_Stones?oldid=38382"
Community content is available under CC-BY-SA unless otherwise noted.