The Council of Elder Witches and Protectors of the Sacred Covenant (also known as The Elders or Sages) were a council of senior good witches who governed over the forces of good. They oversaw and directed Whitelighters in their effort to guide and protect neophyte witches. The death of all Elders was one of three signs prophesied to bring about the apocalypse.

The Elders created and enforced rules for witches and Whitelighters to follow. They were viewed as royalty and can dispense punishment on those who do not follow their directives.

Despite their magical responsibilities, the Elders lived amongst mortals as regular people, dealing with normal human responsibilities like jobs and families. However, they did not use their abilities, or allow other witches, to interfere in mortal matters or crimes.

With their powers, the Elders could congregate anywhere, including pocket dimensions that can resemble real-world locations. Charity Callahan was shown entering one such dimension using her portaling ability. It is unknown if other Elders also possessed abilities or spells that allow them to access these dimensions.

When meeting Mel Vera, the Elders present (with the exception of Charity, whom Mel had already met) obscured their faces through the use of a cloaking spell. Charity acknowledged that the disguises were unnerving, while Priyanka Bari declared it made it impossible to hold a conversation after unmasking herself.

According to Harry, Elders were forbidden to see the memories of Whitelighters and doing so could result in them losing their status as an Elder.

The Killing of the Elders

Three months before the Vera sisters became the Charmed Ones, an unknown entity began killing Elders, starting with the sisters' mother, Marisol Vera.[1] The murders would continue, informing the Elders that the Apocalypse was underway.

These murders caught the attention of Detective Trip Bailey who began to investigate. He learned that all the murder victims had wounds on them that appeared as if they had been struck by lightning and that someone was interested in retrieving the DNA of these victims.

Governing the Charmed Ones

While the Charmed Ones were constituted and began their journey as witches, their Whitelighter, Harry Greenwood, acted as a liaison between the neophyte witches and the Elders. The Council would only make an appearance, in the form of Charity Callahan, when the Harbinger of Hell was defeated and contained by the Charmed Ones. The rest of the council were unable to come to the sisters' aid due to the fact that the Elder murderer was still at large, but Charity did relay that the Charmed Ones were ordered to kill the Harbinger before it could reach full power.

When the Charmed Ones lost the Scythe of Tartarus to a mysterious woman, Charity came back to help the sisters identify what kind of demon the thief may be. Mel was later approached by the thief, Jada Shields, who said that she was a Whitelighter and witch hybrid and informed Mel about the Sisters of Arcana (or "Sarcana") and that the Elders forbid relationships between witches and Whitelighters. Mel would investigate further and learn from Charity that an Elder was actually responsible for starting the Sarcana. There had been a war between the two, but the Elders had believed that the Sarcana were destroyed.

Mel continued to be conflicted between the two groups and decided to summon Charity so she could get more information. Charity brought her into a duplicate dimension to see the other Elders (though their identities were cloaked due to their lives being at threat) and explained how the Council wanted Mel to join the Sarcana and be their spy. However, Mel later chose to side fully with the Sarcana when she saw the Elders as only looking out for themselves.

Eventually, it was discovered that Charity Callahan was the one that had murdered Marisol Vera during a confrontation and some of her fellow Elders to cover her tracks. While Charity had been stripped of her powers by the Charmed Ones and sentenced to Tartarus for her crimes, the other Elders discovered Harry’s previous relationship with Charity, and ruled that it had led to him endangering the Charmed Ones due to his commitment being misguided, and so stripped him of his powers as well.

Due to being irritated that they had no way of communicating with the Elders and that Harry was beginning to rapidly age due to his powers being stripped, the Charmed Ones tried to use their magic in public and were quickly summoned to the headquarters of the Elders. Mel, Maggie, and Macy attempted to force the Elders to reinstate Harry’s powers, but they refused. Instead, they simply reasoned that, as Harry had accepted the consequences of his actions, the Charmed Ones should too. The girls are then teleported back to their attic, but not before Mel tells them that they were duped by Charity as well and asks where their culpability was. 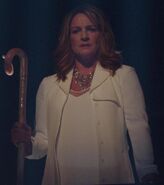 Hunter shapeshifting between himself and Elder Robinson

The Elders' energy beams are deflected by Hunter

Celeste
Add a photo to this gallery

Retrieved from "https://charmed-reboot.fandom.com/wiki/The_Elders?oldid=43274"
Community content is available under CC-BY-SA unless otherwise noted.