The Faction is an organization of mortals that know that magic exists. Despite their motives remaining unclear, they have been capturing magical beings in order to perform experiments on the corpses of deceased human beings, killing the magical beings and infusing the corpses with their magic to create monsters.

As a child, Julian Shea and his family suffered a car crash. Julian's parents died, and his sister, Rosemary who fall out of the vehicle, lied on the street unconscious. Then Julian, who was trapped inside the wreckage, witnessed as a Whitelighter arrive at the scene. He healed the two passengers of the other car they collided with, however, left the others to die. From that day Julian searched after magic to study it and use it's power for the benefit of humanity. Alongside with his legal guardian and aunt, Vivienne Laurent, he founded the organisation called the Faction, which specialized in searching magical creatures and extracting magic from them. Julian was guided by benevolence, Vivienne, however, saw magic and magical beings as a threat, and instead of using magic for good, she created monsters as agents, and tried to absorb all magic of the world. By doing so, she hoped to make humanity the "apex predator" species. The Faction tried to get access to the source of magic called the Black Amber, located under the building of SafeSpace, Seattle. To achive her goal, Vivienne killed countless magical beings, and later even Julian, who tried to stop her. 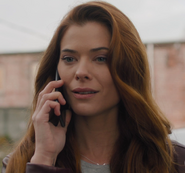 Various witch hunters
Add a photo to this gallery

Retrieved from "https://charmed-reboot.fandom.com/wiki/The_Faction?oldid=47850"
Community content is available under CC-BY-SA unless otherwise noted.