The Truth about Kat and Dogs

WHAT WE DESIRE — Mel (Melonie Diaz) and Maggie (Sarah Jeffery) attempt to find a missing Macy (Madeleine Mantock) with a spell while Harry (Rupert Evans) uses a different method — allowing Abigael (Poppy Drayton) to help him access his subconscious in an attempt to connect with his dark side.

Abigael used powers from her demonic side to help Harry access his subconscious. He was able to see his memories from when he was alive and human. Harry started with memories of his childhood, his grandmother, his father, and his first kiss. He learned that James, who he was before he became a Whitelighter, had another family. After opening a locked door, Harry found a paint of Castle Breithe, an enchanted fortress in Scotland.

Harry and Abigael used the command center to go to Castle Breithe in Scotland. He realized he’d been there before, when he’d just become a Whitelighter. Fierce and deadly Caliban's guarded Castle Breithe, but they had been killed. They found an altar where Harry had a vision. He saw the smoke of the darklighter escape his body into a bottle locked with a key. In the present, all the bottles on the shelves were broken with the darklighters inside turned to ash. Only the bottle of James Westwell was intact with no ash. Someone had let the darklighter out. Harry went back into his subconscious and saw his darklighter’s memory of Macy.

After a lead to finding Macy and the darklighter didn’t pan out, Mel and Maggie decided to use Absum Veri. It was a very powerful, banned tracking spell. They needed to recite an incantation over items representing things she dreads, denies herself, and desires. A demon hound arrived after they tried casting it. They went throughout the house, distracting the demon hound so they could try again. Unfortunately, the dog grew larger and more violent. Mel and Maggie decided to look for Macy’s journal. It would help them get into her head to get the spell right.

As the dog lunged down on them outside of Macy’s room, Mell and Maggie searched for the journal. Mel received a text from Kat, a message from Marisol on the location of the journal. She’d drawn Harry, so they used it in the spell. They received coordinates from a now docile dog. Using the command center map, Mel and Maggie searched the coordinates but saw no red lights. Macy wasn’t in danger because Harry’s darklighter had feelings for her, just like he did.

When Mel and Maggie walked by Kat’s shop, she stopped them. Kat told Mel that she’d been having visions of worms ever since they meditated. Maggie believed that Mel wasn’t being truthful about staying away from romance, as they all promised they would.

Kat was receiving instructions from someone not visible. She texted Mel on their orders.

Abigael: "Harry, this door, it's locked for a reason. The thing the Elders feared most, your connection to your other half, it must be on the other side. It's a mental firewall. You won't get through it with brute force. It's not about fighting, it's about surrendering."
Harry: "To what?"
Abigael: "To the scariest thing of all. The truth."

Mel: "Why is Macy drawing Harry?"
Maggie: "And keeping it in here?"
Mel: "Secret desires."
Maggie: "What if... What if he's all of them? Dreads, denies, desires Not three things but one."
Mel: "Harry?" 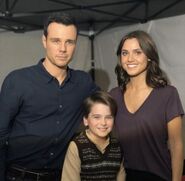 Charm Reboot - Powers (2x05)
Add a photo to this gallery

Retrieved from "https://charmed-reboot.fandom.com/wiki/The_Truth_about_Kat_and_Dogs?oldid=47973"
Community content is available under CC-BY-SA unless otherwise noted.