This episode starts with the girls seeing the light on the map in Portland, Oregon. They go through a portal to Portland and find Bruce, the man that Maggie met before at the rave. He unleashes one of the monsters they created by putting the powers into resurrected bodies. Bruce can control the beast with a watch, but Maggie breaks the watch, and the monster kills Bruce. The girls find someone tied up in a car who turns out to be an elder named Celeste. After she is brought back to the command center, Harry recognizes her as one of the elders that turned him into a whitelighter and are angry at her and leaves. Celeste wants the girls to get the power of three back, but they say they don’t want it back. She says that if a human takes control of magic, it will be unlike anything they’ve ever faced, but I’m not sure why humans having magic is more dangerous than demons having magic. Celeste puts the girls under a spell that puts them to sleep and causes them to dream of helping them get over their fears. Macy has a dream that Harry and Abigael are married and have two daughters, and Abigael is now part of the power of three instead of Macy.

At the end of her dream, Macy is fighting Abigael and accidentally kills Maggie. In Maggie's dream, nobody takes her seriously or listens to her, and everybody sees her as a child. She tries to tell Jordan the monster is coming, but he talks down to her and builds a fort to mock her, and he leaves her. At the end of her dream, the monster that the girls met at the beginning kills Mel. Harry comes into the control room and tells Celeste to wake the girls up. Celeste says that if all of the girls die in each other’s dreams, they will never wake up. I was not sure why Celeste couldn't wake them up since she put them under the spell. Harry tells Celeste to put him in their dreams.

Mel dreams that she is locked up in a mental institution. She gets out of her room and finds Jordan, but he turns out to be his ancestor Lawrence Mortimer Chase, who was a witchfinder, and he leads Mel outside where Maggie and Macy are tied up and about to be set on fire. I wonder if this means that Mel does not trust Jordan. Harry finds them and says that Macy cannot die in the dream, or they all will die. Mel, Maggie, and Harry all offer to sacrifice themselves, and as Jordan is about to stab Harry, they all wake up, and Celeste is gone. They see the light on Portland again and go back there. They find the monster and want to run away but realize that they need to get over their fears. They do the power of three spells again, and it works, and they can fight and kill the monster.

Macy (to illusionary Abigael): You know what is funny? No matter what the reality, you are always the devil. 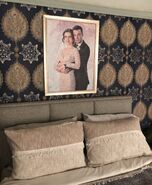 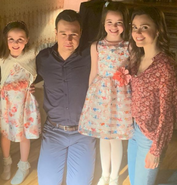 Charm Reboot - Powers (2x15)
Add a photo to this gallery

Retrieved from "https://charmed-reboot.fandom.com/wiki/Third_Time%27s_the_Charm?oldid=46397"
Community content is available under CC-BY-SA unless otherwise noted.