The Time Bracelet is a magical bracelet that was given to Mel Vera by her mother, Marisol Vera, along with the double blades. The bracelet allowed her to speed up or slow down her movements through time. After Mel's aura was stripped, she lost access to her time-based abilities and thus has since not worn the bracelet.

At an unspecified time, Marisol Vera created a hidden room underneath the Vera Manor. Due to her power of prophecy, Marisol knew that her daughters would become the Charmed Ones. She gave each of her three daughters a gift that would help them for battle. Knowing Mel would be a time witch, Marisol gifted her middle daughter this bracelet that allows her to speed up or slow down her movements through time. This is extremely useful when an opponent cannot be frozen in time.

In "The Source Awakens", it was revealed that the bracelet's magic could also be utilized to cast the spell for Balance Restoration. She also used the bracelet to help Harry open the Memory Vault to gain access to the Memory Potion.

The bracelet can only work when Mel activates it consciously by pressing her finger on it, meaning if she is unable to actively press the bracelet, she cannot use its abilities.

In "Perfecti Is the Enemy of Good", Mel's future-self was shown wearing the bracelets. 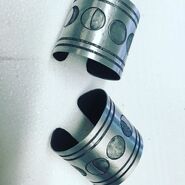 Future Mel (right) wears bracelets
Add a photo to this gallery
Retrieved from "https://charmed-reboot.fandom.com/wiki/Time_Bracelet?oldid=48567"
Community content is available under CC-BY-SA unless otherwise noted.