HIGH STAKES – The Charmed Ones (Melonie Diaz, Madeleine Mantock and Sarah Jeffery) must come to terms with their romantic relationships as they face the greatest sacrifice of their lives. Also starring Rupert Evans, Jordan Donica and Poppy Drayton.

The sisters learn that the fate of the magical beings is all tried to the fate of the tree that has been desecrated. One the last leave falls, all magic is dead. The sisters will also get sick. They need to piece the necklace back together but they don’t know-how. A piece from each sister is somewhere in the world where they hid them.

They decide to go to Abigael and ask her to recover their memories. She is already very weak but agrees. They all get clues and they need to move fast. Meanwhile, at a florist shop in London, Jimmy returns to himself.

Mel tries to work out her clue while she sits with Abigael. Maggie heads to what she refers to as memory lane with Jordan. They arrive at Kappa. Meanwhile, Macy catches a lead about where her piece may be hidden after she examines a pair of sandals she believes she was wearing. Harry transports with her.

Mel calls on Celeste to get her help. She needs to travel through time to the future where she hid her piece. She will need a timekeeper to be on the safe side. Abigael agrees to go. They arrive in the future.

Maggie and Jordan dress up and head into Kappa. They are having a party. Maggie learns that she left a legacy behind, a drinking game. She hopes to do better. She looks in several places with no luck. Heidi recognize her. Maggie needs to hurry.

Macy and Harry arrive on a beach. Meanwhile, Mel visits the grave of her mother. She finds her piece and also sees her own gravestone with her death dated today (The day she came from)!

Mel thinks over her possibilities. Maybe she has to die for the magical world to live. Someone is coming into the cemetery. She and Abigael hide. Ruby is older now. She lays flowers on Mel's grave, telling her granddaughter Mel to sacrifice herself for the magical world. Mel tells Abigael they need to go back now.

Maggie is feeling defeated. The magic is dying fast and she cannot find her piece. She cannot believe she could have hidden it here. They hide out on a balcony. After looking at the stars, Maggie realizes the clue Kappa had to do with the stars and constellation and not the sorority. Meanwhile, Macy has also put together the idea that one of the sisters has to die and she tells Harry she will be the one. She is the oldest. Harry begs to take her place. She tells him they will find one another again. They dance on the beach near the waves in the dark.

The sisters return to one another and chant a spell to return the power. Now they need to return it to the tree. To do this they must break the sisterhood. They all argue about who will make the sacrifice. Mel quickly grabs the source and gives it to the guardian. Macy and Maggie run to her side. They will face it together. Just then, Jimmy shows up to see Harry. Their bond is severed with magic dead, Jimmy tells him. Now they can kill one another. Jimmy attacks him. Harry fights back. Harry finally stabs Jimmy who dies quickly.

The sisters come in to see what happened. Their destiny was their own. They did it. They go to celebrate with hugs but couldn’t jump back in pain.

Meanwhile, Abigael wakes healthy again but finds a letter from her mother and sister telling her to leave them alone. In a rage, she burns the letter, and then destroys her apartment. After that, Abigael takes out the item they have returned to her. It turns out to be a miniature totem in the shape of a horned black demon. Abigael breaks the totem, and this action restores her demonic side. After that, she turns into a demon herself.

Macy: At least it's more specific than sandals. What does that even mean? I hate the beach. I don't even wear open toed shoes. Why would I hide the Source there?

Maggie: Jordan, you don't have to come with me.
Jordan: Look, I can say that this is just about me trying to help another witch, break my curse, but that would be a lie. I care about you, Maggie. And your sisters. I don't want anything to happen to you. 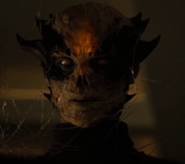 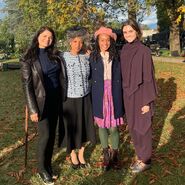 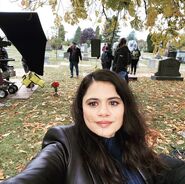 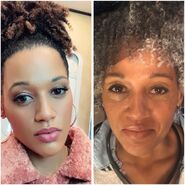 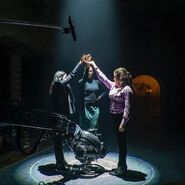