TELLING THE TRUTH — With Macy (Madeleine Mantock) on a quest to find answers, she goes against Harry’s (Rupert Evans) advice and summons up a Necromancer which puts her and Maggie (Sarah Jeffery) in harm’s way. Maggie attends a frat party at Lucy’s (guest star Natalie Hall) encouragement, to help her get over Parker (Nick Hargrove). Meanwhile, Mel (Melonie Diaz) helps Harry who is struggling with his regained memories.

We open the episode 28 years ago with Marisol begging a mysterious woman to revive an infant Macy. She agrees to sacrifice anything in return for her baby’s life. The woman then awakens the baby, who appears to have been dead for some time. The woman then tells them her sacrifice must be leaving Macy forever (after two years together), never allowed to set eyes on her again.

Back in the present day, Maggie and Mel continue to read letters from Marisol and Dexter. Harry arrives, and Maggie reveals that Macy was revived by a Necromancer.

Macy comes downstairs and insists her sisters stop worrying about her.

Harry knocks on Macy’s bedroom door and tells her that he understands how she feels. He, too, died and was brought by the Elders. He insists he experienced the same struggle of confusion when one cheats death. Macy admits she feels tainted because it’s unnatural. She wonders if her resurrection is where her “darkness” comes from.

At the University, Maggie bashes Mel for stalking Niko’s Instagram. Mel says she was just curious why Niko chose to become a PI, but Maggie reminds her there’s no way she can get back with Niko again.

Maggie runs into Lucy, who asks if she’s going to the stoplight party that night. Maggie declines, but Lucy insists that she attends, whether Parker shows up or not. Maggie declares she will wear green to the party, telling the world that she is ready and available.

At the manor, Macy calls the Necromancer that once brought her back to life. The woman appears, but tells Macy she has “no idea what she’s done.”

The Necromancer Knansie is scared, worried a witch who is hunting her was the one who performed the spell. Macy promises it wasn’t her, and she just wants answers. Knansie agrees if Macy helps her brew her spell.

Mel meets Niko at a café. It's one of the cafes they used to frequent while they were dating. Niko explains she made the PI change two years prior after she woke up and felt like something was missing from her life. Mel bends over, revealing a scar on her shoulder. Niko is concerned, but Mel brushes the topic off after Niko proclaims she was having déjà vu.

Macy reveals to Knansie she’s telekinetic and finds out her mother actually took the necromancer out of Tartarus. She claims she was put there unfairly by the witch Syd, who was upset Knansie wouldn’t revive a demon Cyd had fallen in love with.

Knansie also explains when resurrecting someone, she has to call upon light and dark forces, and sometimes those turn evil instead of good. Maggie enters, right as the witch Cyd shows up to attack them.

Harry tries to orb himself and Mel back to the manor for help, but they end up in England instead. Harry reveals lately, he hasn’t been able to take a hold on his powers thanks to a personal matter he’s been dealing with. He then tells her that they are in Manchester because that is where his son currently lives.

The girls continue to get attacked, with Cyd finally revealing herself. She claims Knansie turned the love of her life into a demon. Сyd then continues to attack, but as she’s about to hurt Maggie, Macy loses her temper and throws Cyd out the window.

In Manchester, Mel gets news of the situation back at home. They go for a pint of beer, and Harry comes clean about the secrets he’s been keeping regarding his son. He explains his stress has clouded his power and he can’t be their white lighter anymore. Mel tells him she’s going to help Harry finds his son, even though he knows nothing about him, not even his name.

Back in the manor, Knansie ties Cyd with magical chains. Macy tells Maggie to go and have fun at the party. Knansie insists on killing Cyd, but Macy won’t kill another witch. Instead, Macy suggests they find a spell to constrain her in the Book of Shadows.

At the party, Lucy and Maggie are having a great time, when she spots Parker from across the room. A bunch of guys dance with her, but none of them stick when she can’t be honest about anything regarding her life.

Maggie confronts Parker (who is wearing red, missing her) and unloads on him. Parker apologizes but promises that he didn’t sell the Charmed Ones out to his father. She walks away anyway.

Macy and Knansie realize that Cyd has escaped the chains.

Mel and Harry look all night but can’t find any leads to his past. Harry realizes he feels strangely drawn to a church nearby. When they enter, however, Harry can’t pick up any feelings, so they go and search the records. Harry finds a picture of himself with his wife, and his original name was James, and his son’s name is Carter.

At the manor, Knansie and Macy are on the lookout for Cyd, when they get a call from Maggie, who tells them Cyd has her captured in the frat party bathroom. Cyd takes the phone and threatens the girls, tellng them Knansie has to show up at the party in 15 minutes, or Maggie will die.

Macy and Knansie get to the party and ask Parker for help. They find Syd in the bathroom waiting for them, with Maggie drowning in a shower. Macy starts to stop Cyd’s heart with her powers until she releases Maggie.

Macy is about to kill Cyd, but Parker begs her not to tap into her dark side. Cyd insists that Knansie is evil and that she made a deal with a demon to stay young forever. Everyone she revives, therefore, must be good, and then become demonic with the blood she uses to revive them.

Knansie tries to escape, but Parker stops her. Knansie attacks him, but then evaporates, breaking the terms of her deal by attacking a half-demon.

In Manchester, Mel and Harry finally track down Carter, who is now a grandfather. Because he’s happy and healthy, Harry feels like he can let go and go back to being a white lighter.

The next morning, Maggie and Mel comfort Macy, who says she’s feeling better now that she has the answers and knows the truth. Macy says she can feel how the demon blood in her takes over, and worries about it controlling her in the future.

At the coffee shop, Mel ends up bailing on her next meet up with Niko, letting her go once again.

Parker catches up with Maggie at school to make sure she’s okay after the party. She tells him she doesn’t hate him and appreciates what he did to help save Macy, but there’s no getting back together; at least for now.

Lucy is then revealed to be Skyping with Alastor, who has control over her mind and wants Lucy to get Parker and Maggie back together. He tells her she needs to hurry, and make sure they fall back in love.

Knansie: "You're a demon?"
Parker: "Half-demon. But who's counting?" 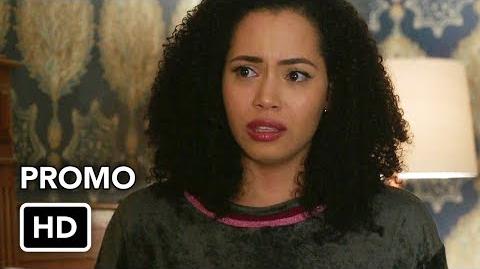 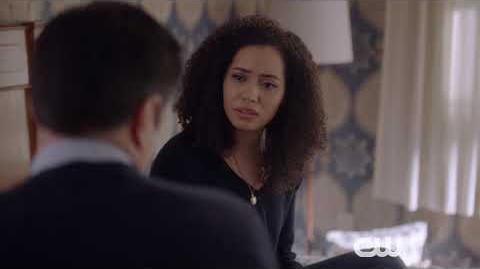 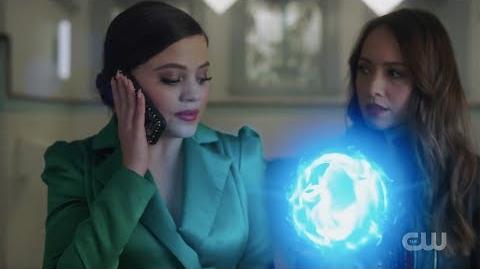 Retrieved from "https://charmed-reboot.fandom.com/wiki/You%27re_Dead_to_Me?oldid=38359"
Community content is available under CC-BY-SA unless otherwise noted.